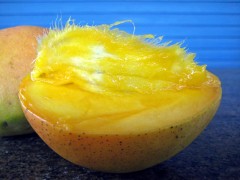 Mango seeds could be harvested and used to kill Listeria: Joshua Brockbank

New research shows the humble mango seed could soon be used as man’s latest weapon against the deadly Listeria virus.

The research conducted by Canadian PhD student Christina Engels was published in the Journal of Agricultural and Food Chemistry.

While working towards her PhD at the University of Alberta, with the aim of creating natural food preservatives, Ms Engels discovered that not only do the natural tannins found in mango kernels act as a preservative, but they also attack the Listeriosis bacteria.

Trevor Dunmore from the Australian Mango Industry Association says that in Queensland during “an average season 20 per cent of the crop goes to processing” for juicing and canning.

Mr Dunmore says at the moment most of the mango pits are thrown away, while “small volumes are used for plantings”.

If they could be made into a bi-product “that would be invaluable” to the industry, he says.