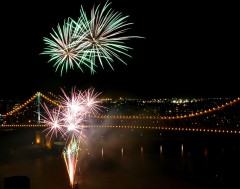 The spectacle of the QBE Riverfire : Craig Jewell via stock.xchng

The Brisbane Festival organisers promise that this year’s QBE Riverfire will be “bigger and even better” than previous years.

The Brisbane River fireworks spectacular on Saturday September 12 will mark the start of  the festival.

Hundreds of thousands of people are expected to line the Brisbane River from 7pm to 7:30 (AEST) too watch the fireworks display which span from the Story Bridge to South Bank.

The Australian Defence Force will entertain people with drills, aircrafts and live music on South Bank from 12 noon.

104.5 Triple M and Channel Seven will cover the events with live outside broadcasts throughout the day.

Those heading to South Bank are to be advised that they should not bring glass, alcohol and drink bottles with broken seals, including bottles of water or soft drinks.  These will be confiscated by security staff at the location.

For more information on rules concerning the QBE Riverfire as well as road and bridge closure before and during the event, check out the official website.