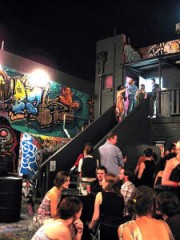 Walking through Brisbane’s Fortitude Valley on Friday night, the senses are assaulted from every direction with the invasive pulse of club music, the wafting smell of cheeseburgers, and the constant struggle to avoid the drunken masses as they converge on Brunswick Street.

Yet just a short stroll from the epicenter of activity, you will find a different kind of scene, with galleries and studios filled with young art enthusiasts taking in the best Brisbane’s emerging artists have to offer.

Artist-run initiatives are leading the charge on the Brisbane art scene, as multi-purpose galleries and studios like Jugglers Art Space on Brunswick Street provide an outlet for local talent.

“Lots of artists utilise and experiment with these spaces – it gives them the opportunity to show a body of work and try out different techniques and ideas,” Mr Eyles said

Since 1998, Jugglers existed as a bi-monthly music and visual arts event before settling into their Brunswick Street home in 2002.

Drawing from the ethos “creativity does need not to be market driven to be valid”, Mr Eyles and director Randal Breen are proud to provide an alternative to their commercial counterparts.

“Commercial galleries often won’t allow an artist to experiment as they need a guarantee that the work will sell, so they are driven by market expectation,” Mr Elyes said.

“We have worked Jugglers so it is sustainable and able to take that risk with emerging artists.”

“It gives the artists not only the opportunity to display but produce a good quality and a good standard of work,” Mr Weber said.

“It universally raises the bar.”

While some people in the creative community say  it is becoming too mainstream due to the younger crowd the galleries attract, Mr Weber says it is a medium that should be available to anyone who is interested.

“It negates the reason why people should be there – you can’t pick and choose, every scene has its pitfalls. but as a whole it is much more important that everyone gets a chance to be a part of it,” he said.

“I think it’s great we can go along to these shows and appreciate such talented artists from our own city,” Ms Burke said.

“It’s a great time to be in Brisbane because you can feel how alive the art scene is.”

Mr Eyles says the talent emerging from the Brisbane scene is definitely making the other capital cities sit up and take notice.

“Unlike Sydney where there is a lot of expectation and pretentiousness, Brisbane is more like Melbourne,” he said.

“It’s more supportive and open-minded and the scene here has been bubbling away for years but you may just have to dig a little deeper sometimes.”

He says the hardest part is finding the time to focus on his own art.

“We love doing it and showing other artists’ work but you have to remind yourself why you started in the first place and that was to show our own work,” he said.

“It is a constant struggle to find balance but we love it.”