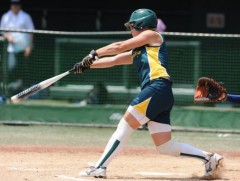 The International Olympic Committee executive board has decided to axe softball from the 2016 Olympic program, opting to shortlist rugby sevens or golf instead.

In October the 106-member IOC assembly will choose one of these sports to feature in the 2016 Olympics.

In 2005 – after four Olympic appearances – the IOC voted softball out of the 2012 London games, leaving the sport – along with seven others – on the chopping block for 2016.

As a result the International Softball Federation set up ‘BackSoftball’, a campaign which aimed to promote the sport for the 2016 Olympics using key athletes as ambassadors.

One of the ambassadors is Manly’s own Beijing Olympic bronze medallist Danielle Stewart, who is passionate about the sport and its quest for reinstating Olympic status.

“I was absolutely amazed when I heard the executive board’s decision not to include softball in the shortlist,” she said.

“We have a 100 per cent clean doping record and it’s played in 127 countries around the world.  I still truly believe that softball, a women’s sport, deserves Olympic status and we will keep fighting until we get it.”

The Australian softball community has been devestated by the news, with some Olympians threatening to send their medals back to the IOC.

Up and coming softballer Rebecca Whalley said the decision will affect the future athletes of the game.

Australia is the highest ranking softball country in the world for females and males combined, largely due to their success on the Olympic stage.

In the past four Olympics, the Australian team has picked up three bronze and a silver medal, making the sport one of the most successful in Australia’s Olympic history.