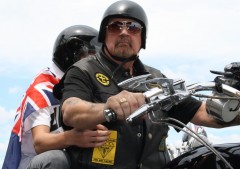 A motorbike riding church group may not be able to continue their charity work under the Queensland Government’s proposed new anti-biker laws.

These laws would not allow bikers to associate with each other if they have been involved in criminal activity.

Australian national president of the Tribe of Judah, Pastor Terry Walker says the laws are “ludicrous”.

“Some people believe you can never change. I personally have a [criminal] record … but I changed 26 years ago and now feed thousands of people very week,” Mr Walker says.

The Tribe of Judah is a ministry which helps outlaw bikers find God. They regularly organise charity events and provide free food to people in need through their Food Barn program and food vans in Logan City.

But because the Tribe is technically made up of bikers, Mr Walker may not be able to continue his work if the laws are put into place.

Mr Walker believes the laws are targeting a negative stereotype.

“I know a lot of these different people,” Mr Walker says. “They are not criminals. They’re family people. They run businesses. But they love their bikes.”

Mr Walker says the laws “will affect everybody in Queensland”.

“What we’re saying is ‘Look deeper into it. It’s just not that simple’,” he says. “We’re standing up for our civil liberty.”

Motorbike clubs have been under fire since the infamous brawl between rival groups the Hells Angels and Comancheros at Sydney airport earlier this year.

In Queensland, the Bandidos club was recently discovered operating a secret clubhouse in Woolloongabba.

Their rivals, the Rebels, have recently set up a new clubhouse in Mt Isa.

The State Government is proposing to copy New South Wales laws, which were put into place after the Sydney airport brawl.

The laws also prevent bikers from working in the security industry, holding a liquor licence or fortify properties.