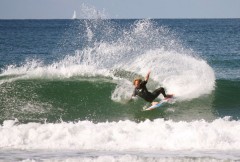 Coolum Beach local Shaun Clelland is set to make waves as he gears up for this month’s Queensland Championship Circuit (QCC) on the Sunshine Coast.

Queensland’s best junior surfers will slash it out for a chance at $2, 000 in prize money and a spot at the 2010 ASP Quiksilver Pro trials on the Gold Coast.

“I’m pretty stoked to be a part of the event.” Clelland said.

“To be given the chance to compete at the ASP trials is awesome.”

Sunshine Coast beaches will provide the battleground for the deciding event of the fourth and final stage of Australia’s state-based surfing circuit.

“The Coast has some sick beach breaks and the point breaks in Noosa are epic when the swell is up, so hopefully there’s some swell around next weekend,” Clelland said.

“The event is certainly the highlight of Surfing Queensland’s calendar on the Sunshine Coast and supporting local talent is truly exciting,” Raaschou said.