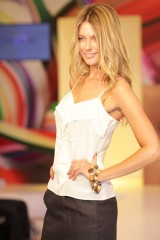 The arrival of Hawkins on the runway caused a stir with the crowd, with many lining up afterwards to score an autograph.

Ex-Miss Universe Hawkins was not the only one to elicit cheers and wolf whistles from the audience – with shirtless male models and a trio of plus-sized models also crowd pleasers. 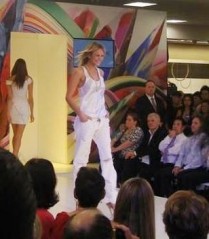 A model displays Camilla and Marc’s latest season at the Myer Brisbane launch.

The collection was launched last week in Sydney and will travel across Australia over the coming weeks.

When asked about the Sydney launch, Hawkins said it was “so much fun” travelling and taking the parade to customers, but she was ‘loving the warmer weather’ in Brisbane.

The model also offered up some style advice for the coming summer, telling the crowd, “it looks like the eighties are definitely back”.

Designer Nicola Fenetti agreed, saying on the day many designers were drawing inspiration from the colours of the eighties, as well as the silhouettes.

Hawkins’ said her hot tips for summer were all about colour.

“It’s nice after being stuck in black all winter,” she said.

“The ‘must-haves’ for summer I think will be a statement shoulder jacket and some cut-off denim shorts.”

After the encore parade, she debated the wearability of some of the latest trends with the audience, including eighties-inspired shoulder pads.

“Do you girls like the shoulder pads, is anybody getting into it?” Hawkins asked the crowd, before declaring there was a ‘mixed reaction’.

Hawkins said she “likes the pared down version” of the latest trends, as opposed to the extreme cutting-edge looks.

Listen to Hawkins’ words of wisdom on the latest style here.