Festival director Lindsay Bennett says MBFF has “positioned itself as the premier fashion event in Queensland and generated national recognition for launching spring-summer collections to the country”. 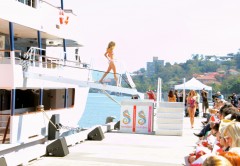 The festival was launched with a show of leading Australian swimwear brands at Portside Wharf on Sunday August 23.

Swimwear models descended from a yacht onto the wharf-converted catwalk in bright print and retro-inspired swimsuits.

Timing got the better of some of the models on the narrow, single direction ramp with a few instances of models having to alter their path to avoid collisions.

Despite minor problems, the sun, bikinis and atmosphere kept the audience interested.

First-time festival-goer Rachael Black says she was surprised she enjoyed the event so much.

“I didn’t think I would be the type of person who would enjoy this sort of thing but at the end, I thought it was really cool, really different,” she says. 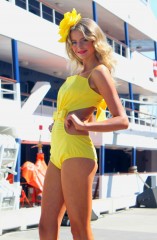 Jessica O’Connor says she goes to the festival every year and the new venue of City Hall has changed the feel of the festival.

“The Hilton ballroom is a lot smaller, so I think that in terms of ticket sales, they’ve done a lot better this year with the new venue,” she said.

“It’s made it more exciting and more interesting.

“There is definitely a greater diversity of people going.” 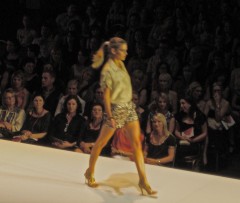 “It is an absolute privilege to help foster a new generation of Queensland design talent,” Ms Bennett says.