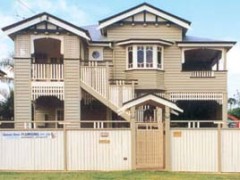 The design of the high-set Queenslander may make a comeback. Pic: Resene News

The Sunshine and Gold Coasts could face drastic changes to house designs as the State Government plans for rising sea levels and the effects of climate change.

According to Climate Change and Sustainability Minister Kate Jones, sea levels are predicted to rise 30cm by 2050 and 80cm by 2100.

It also proposes that bedrooms and living spaces are upstairs and the ground floors only be used for laundry and garages.

The draft plan also aims to ensure houses can be relocated or abandoned in the vulnerable areas if needed, while seaward extensions will also be banned on homes in areas vulnerable to coastal erosion.

On releasing the report in Cairns, Ms Jones used the cyclonic weather and king tides in far north Queensland earlier this year as an example of future destructive weather.

“More than 80 per cent of Queenslanders live on the coast and these events have demonstrated the kinds of impacts that sea level rises and climate change related weather events could have on Queensland’s coastline,” Ms Jones said.

“With this in mind, careful and responsible management of our coastline and coastal areas is now more pertinent than ever.”

Coastal councils have been told they will not lose their planning powers, but the Local Government Association of Queensland (LGAQ) said councils are bombarded every day with development applications on the coast.

LGAQ president Paul Bell said one of their main concerns was they did not have the research capabilities of the state governments to foresee climate change issues.

“This is an unreasonable situation which requires an integrated state-wide approach in the public interest,” Councillor Bell said.

Consultation on the draft coastal plan will commence on August 28 and close October 31.