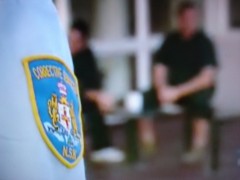 A still from the Four Corner's report "Kids Doing Time".

Mr Bartholomew says that while the report accurately covered New South Wales and Victoria, it failed to mention the unique flaws in the Queensland juvenile justice system.

“Queensland remains the only state in Australia that detains 17-year-olds in adult prisons,” says Mr Bartholomew.

“These people are legally children … it’s in contravention of the UN Convention on the Rights of the Child.”

Under current  laws, 17-year-olds in Queensland  can be sent to adult prisons or made to do community service with adult offenders.

A report by Queensland’s Youth Affairs Network in 2007 outlined the problems with this system.

“Seventeen-year-old children are exposed to a potentially dangerous environment when exposed to the negative influence of seasoned mature offenders,” the report says.

In 1992, the Queensland Juvenile Justice Act was created allowing regulations to be made so that 17-year-olds could be included in the youth justice system. But the Queensland Government is yet introduce those regulations.

“The excuse the [Queensland] Government always give is that the infrastructure cost would be too much,” says Mr Bartholomew.

“Which is partly true … but youth crime doesn’t have a quick fix solution.”

For more information head to http://www.yac.net.au/.