Koala population on the hop 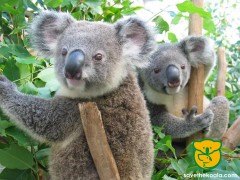 Our koala population is in decline: Australian Koala Foundation

I live here in Australia,

In a eucalyptus tree,

I’m as cuddly, cute and charming,

as an animal can be …

Do these lyrics sound familiar? No. Perhaps we should take it from the top.

And I don’t think it’s fair, 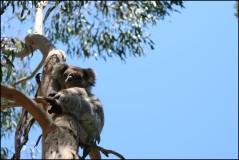 I’m a marsupial and proud of it,

And there can be no doubt of it,

So please don’t call me a koala bear,

It’s driving me up the wall …

Surely you must know it – Don Spencer’s Please Don’t Call Me A Koala Bear. It’s a cute song really but, of course, the topic is quite inconsequential.  A more pressing matter for the koala is the bulldozing of their habitat in the name of development.

As Steve Homewood, president of the Bayside chapter of the Wildlife Preservation Society of Queensland, points out: “Whilst Queensland is celebrating 150 years of foundation, many of us are reflecting on the catastrophic decline in our koala population during that time to a point where the urban koala in South East Queensland may not have a viable population by the end of 2010.”

The State Government’s 2009 Koala Report reveals the coast’s koala population has more than halved in a mere 10 years.

Accordingly, one of the largest koala populations in Australia could comprise less than 500 koalas by 2010.

“What we have known for so long is now spelt out clearly in a State Government scientific report; we continue to destroy koala habitat and consequently they [koalas] are rapidly accelerating towards extinction,” Mr Homewood says.

“The pro growth agenda and infill development policies promoted in SEQ are pushing the koala to extinction.”

A precursor to the 2009 Koala Report, the Report for Koala Habitat Survey and Mapping – commissioned by the Environmental Protection Agency in partnership with the now amalgamated Pine Rivers, Caboolture and Redcliffe councils – found that the koala population in Pine Rivers alone had halved since 2001.

What’s more, the report, which was released this time last year, concluded that: “The vulnerable listing [of the koala] is more than justified and that the current management regime to protect koalas in SEQ is not adequate … A precautionary approach should apply to future conservation efforts and be more inclusive rather than exclusive.” 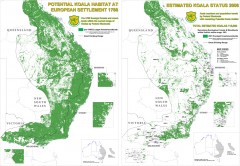 According to the Australian Koala Foundation, there are at present less than 100,000 koalas left in the wild.

A spokesperson for the foundation, Sophia Walter, says this fact should not surprise anyone given the damage we have caused koala habitats.

“Habitat loss is the leading cause of decline in koala numbers. Over 80 per cent of koala habitat has been destroyed since European settlement,” she says.

The foundation’s catch phrase No Tree No Me goes without saying.

What’s more, a poor effort on the State Government’s part in relation to koalas has, in the past, done little to effectively address the issue.

“The State Government has passed 12 pieces of legislation since 1995 that was supposed to protect the koala, but we continue to see steep declines in numbers because these documents are just not effective,” Ms Walter says.

“If the Government continues to knock down koala habitat and manage the landscape improperly, then there is no surprise that koala numbers are falling to extinction.”

But the State Government has arguably seen a need to redress the balance.

Queensland Premiere Anna Bligh was quoted by The Courier-Mail on August 6, 2008 as having conceded the Government had not done enough in the past to protect koalas.

“It would be a great tragedy if we stood by and let the koalas of South East Queensland be wiped out,” she said.

“We face total loss of koalas within 20 years. We need to take on issues that in the past we have felt were too tough on residents … frankly we’ve been too cautious and it’s time to take tougher action … doing nothing is not an option.”

A year on and significant parcels of land within Redland City have been cordoned off by the State Government for koala habitat and rehabilitation under the South East Queensland Regional Plan, launched just last month.

This land – close to a combined 900 hectares across Thornlands and Southern Redland Bay – had previously been earmarked for future development, but Redland City Council insisted it be protected.

Redland City Council, who perceives the protection of the koala to be dependent upon the preservation of koala habitat, welcomed the changes.

For its stance on the protection of koala habitat, many wildlife groups congratulate the Redland City Council. They say Redland City Council is one of a few local governments in South East Queensland who have taken note of the koala’s plight and engage in positive action to protect the rapidly diminishing koala population.

The fact still remains however that the future of the koala hangs in the balance.