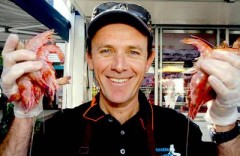 Five years ago, Princess Charlotte Seafoods was run by David Cooper from the garage of his house. Nowadays, the company has grown exponentially.

“I started out with a home-based business with a cold room under my house and served approximately 100 customers per week,” said Mr Cooper, who in 2004 retired from operating and owning fishing trawlers along the Queensland coast.

The company sells direct to the public from their factory on the northside of Brisbane and at farmers markets held every weekend around Brisbane.

Despite the recent financial crunch, Mr Cooper and his business have not been affected.

“When we first started out, we sold both imported and local seafood. Now due to the continual increasing demand for Australian seafood, we stock Australian caught and produced seafood,” Mr Cooper said.

“The demand has just gone through the roof, especially at peak times like Christmas and Easter…every year it gets bigger and bigger.”

In recent months, various Australian industries and business have suffered due to the recession, however the seafood industry has experienced growth.

The Australian Seafood Industry says the production of seafood has increased 10 fold over the past decade.

Moreover, the gross value of production within the Australian industry has continually increased 10 per cent per annum since 1990 and the industry turns over approximately $3 billion a year.

Although the industry started in the early 1900s, it has diversified over the past 30 years due to new technologies and knowledge of locations and species.

Seafood expert Jon Maurice says the commercial fishing industry is one of the most valuable Australian rural industries.

“In Australia approximately 600 seafood species are caught and sold…and we are known world wide for our amazing fresh products caught right around the country,” Mr Maurice said.

“Despite the current unstable economic climate, the seafood industry continues to prosper.

“Research has shown that Australians need to eat at least two serves of seafood a week because it is so great for you,” he added.

It’s true. Many medical researchers have listed seafood as a must eat in order to maintain a healthy and well-balanced life.

“I purchase all my seafood fresh at the local markets…and I’m willing to pay the increased price for Australian caught and produced seafood because I know it will be great and it’s local,” she said.

“It’s also a great food to give the kids, and there is so many different types of fish that you can disguise as something else to make them eat it!”