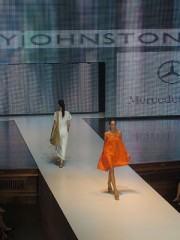 The annual Brisbane Mercedes Benz Fashion Festival kicked off on Sunday with attendees disappointed with value for money.

A ticket to the event cost $43 with the show wrapping up in 20 minutes, leaving a lot of paying viewers stunned with the brief display of fashion.

Radio 96.5 reader Joanna Hayes attended the event and was unsatisfied with the show based on the ticket price.

“I was a bit surprised as to how short it was. There was no actual announcer or MC for the event, it was a pre-recorded message. So I think it was far too overpriced for the short amount of show that we got,” she said.

Brisbane model Monique Kathleen Wright mingled after the show and agreed that the ticket price did not match the projected experience.

“I’m always backstage so I don’t know what you guys see out there. But in terms of value for money I would expect at least a 45 minute show for the money paid.”

The spread of elaborate designs were received well by the crowd.

No designer outshone the others, but a few signature pieces for the wardrobe this summer were seen in the show.

“Definitely the maxi dress, the maxi dress continues to be a strong contender for summer fashion. I would say the power shoulder is another big one,” Ms Hayes said of her favourites.

The fashion festival finishes on Friday with the last show held on the Queen Street Mall stage.