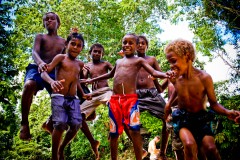 Children in Auki on the island of Malaita at a swimming hole: Kylie Travers

Life in the Solomon Islands has long been punctuated by crime, ethnic violence and government corruption.

Yet despite this instability, many people of this archipelago – located east of Papua New Guinea in the South Pacific Ocean – have risen above their situation.

Members of the Bridgeman Baptist Community Church on Brisbane’s northside give testimony to this, having seen for themselves how those in this third world country live.

Connections in the village of Nafinua, East Kwara’ae, on the island of Malaita, have seen parishioners visit twice before – each time for various building projects, including the construction of the Fere’abu Bible School and several houses.

They were chosen based on their talents and foreseeable contribution – whether it were medical, musical, culinary or public speaking.

Pastor Daniel Perkins, a member of the third team, said his first experience of a third world country was eye-opening.

“We were so happy to be able to bless these people with what we have,” he said.

“Some people over there have so little in terms of financial and material wealth, but one of the best parts of the trip was seeing how happy they are with life and how much they count on God to provide for their needs.”

According to the World Bank, at least 80 per cent of humanity live on less than $10 a day.

But as Michelle Rattray – another member of the third team – pointed out, despite Australians being considered part of the world’s “royal circle”, something is lacking here.

“We are so lucky to be living in a country where opportunities are practically overflowing,” she said.

“But we always seem to be yearning for more – a better car, another holiday, new clothes, more money; we are perpetually unsatisfied.

“We fill our lives with rubbish and hold too much value in materialistic possessions, but over there, living is just living.

“In reality, they have got it; they have discovered the secret to life.”

Ms Rattray said that before the trip she used to feel sorry for those living in third world countries. 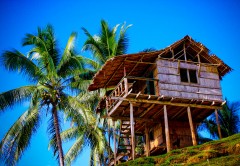 However, now she has a fresh perspective and she is envious of the Solomon Islands people.

“They possess an immense joy that most people will never know and they focus on the things that really matter in life,” she said.

“It was the closest thing to heaven I have ever experienced.”

The passion of the members of the Bridgeman Baptist Community Church is evident in their desire to assist wherever they can, helping the people of the Solomon Islands gain access to education, food and clean water.

“Before we went we thought we were just going over there to help them, but in the end, we were the ones who walked away gaining something from the experience,” Ms Rattray said.

The church’s third trip was originally to support the Solomon communities with their Christian Youth Convention.

However it fell through because a suitable venue could not be found to hold the amount of people attending.

Pastor Daniel said the main purpose of these trips was to build and strengthen relationships with the communities.

“Our heart is to serve them, give our time and bless them,” he said.

“Our goal is to help out as much as we can without intruding on their culture.”

The church hopes to raise enough funds to organise another trip later this year.