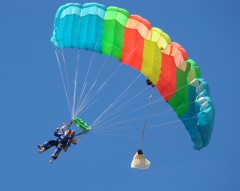 After the heart pumping free fall, skillfully controlling the parachute to hit your target is the next best thing: Jackson Hamilton

Does the mere thought of a recession make you want to jump out of a plane? Does the term Global Financial Crisis (GFC) create an urge to plummet thousands of metres out of the sky?

Since the start of the so-called recession, most people have been working harder to secure their jobs, cutting back on luxuries and saving every spare dollar for a rainy day. But despite all the doom and gloom, some thrill seekers are using the GFC as a fantastic excuse to skydive.

According to several Brisbane and Gold Coast skydiving companies, people are queuing up to jump out of planes.

Most of the local skydiving companies have seen an unpredicted increase in patronage since the start of the GFC.

Sue Peters, the reservations manager from Jump The Beach, says they cannot believe the massive increase in customers.

“I’m gobsmacked by the numbers,” she said.

“I would not be skydiving if I was concerned about where my next dollar was coming from.”

Over the past few months, Jump he Beach has conducted an average of 120 jumps every weekend at their Brisbane branch. They also currently conduct 20-25 jumps every weekday.

Known for its adrenaline and heart palpitating qualities, skydiving has previously been an activity associated with young, healthy and fit males. But the times have now changed.

Alice Scott from Redcliffe City Skydive says she has definitely seen more females and an older generation trying their hand at the extreme sport.

“We have an 84-year-old jumping tomorrow!” she said.

Summer is usually the busiest season for skydiving as the days are longer and the sunsets are more beautiful. The season in Brisbane usually starts in early November stretching out to late February; however this year there has been an increase in customers during the colder months.

David Guralnek from Gold Coast Skydive thinks his increase in business is not linked to the recession itself, but mainly due to Prime Minister Kevin Rudd’s stimulus package.

He has also experienced a large percentage of customers celebrating their 18th or 21st birthdays and anniversaries.

Traditional wedding ceremonies have also been bombarded by skydiving elements, as many young couples want something unique and special for their big day.

The most popular scenario is having the groom parachute down to meet his bride on the beach where the ceremony then takes place.

Unfortunately, the recession has not been favorable to all daredevil activities.

Amy Heard from Jet Boat Extreme, located on the Gold Coast, believes their business has flatlined in recent months.

Their main clientele are international tourists, but they have created additional promotions since the recession to lure more local people in.