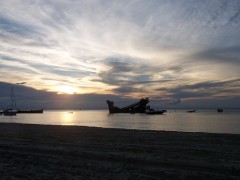 Moreton Bay tour operators have had a tough year following a disastrous oil spill in March, coupled with a downturn in the numbers of visiting tourists spurred by the global financial crisis.

Despite the tough times, operators in the region have praised Brisbane Marketing and local councils for their support through the ‘Donate a Day to the Bay’ campaign.

Tracey Jackson, owner of Solo Adventure Sailing on Moreton Island, said the campaign had been a huge help in generating business.

“We’ve gone from being dead quiet to doing quite a large amount of business.”

“Rather than couples or international tourists, we’ve been seeing a lot more local businesses and groups getting together to spend a day out on the bay,” she said.

“Not all businesses are doing so well though; the 4WD operators were hit the hardest.”

“We have had lower numbers this autumn and winter season than in years gone by, particularly May and June,” Mr Skorsewski said.

He said there was an ongoing lack of awareness of Moreton Bay as one of Queensland’s premier tourist destinations.

“This campaign was excellent in creating awareness of the plight of Moreton Bay, but we are always in need of assistance in getting the message out that it is must see natural destination,” Mr Skorzewski said.