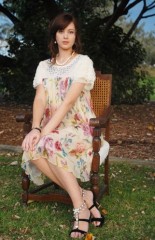 Sydney, Melbourne and Brisbane fashion weeks are just around the corner.  With this comes the usual glitz and glamour, but lurking behind the velvet ropes are smaller fashion labels almost drowning under the pressure of the global financial crisis.

But local designers are going bust and struggling to keep their head above water.

Just last month, one of the world’s most extravagant French designers, Christian Lacroix, succumbed to financial woes, forcing the iconic fashion house to close its doors.

Lacroix said in an interview with Associated Press Television News that for the label to be properly relaunched it will cost $87.8 million, and that keeping a fashion label alive costs more than feeding a small nation.

“[Even though] their designs [are] sprawled across the pages of French, American and Australian fashion bibles, Vogue magazine are struggling to maintain cash flow, investors and clientele,” she said.

Ms Hall is the designer, director, marketing manager, boutique owner and publicist of her own label, Style Workroom.

She is just one of the many talented Australian designers who are coming under the pressure of the ongoing global financial crisis.

“It’s not my lack of creativity but financial power,” she said.

“In some ways there isn’t any space left for artistic creativity anymore.

“I’m now forced to do price point imports in order to be creative and generate the money I need to use beautiful fabrics and really let my imagination run free.

“It has become incredibly hard for smaller designers to keep up with the fashion industry.

“It’s just not us though, the bigger labels are even doing it tough.”

Ms Spurgin suggests smaller designers must continue to serve their existing clients and keep on top of accounting records to ensure their business does not burst at the seams.

“Smaller designers need to charge more than chain stores as they have larger overheads and because customers are vigilant with their money they are more likely to pay down debt than buy non-essentials,” she said.

But Ms Spurgin says there is hope for the future.

“If small designers can hang on in the tough times, they should reap the rewards when the economy improves and people are more likely to spend on luxury items,” she said.

Despite the $850,000 budget for this years’ Fashion Festival, local designers are finding it increasingly difficult to get noticed in the often cut-throat world of fashion with a single show at the festivals costing upwards of $20,000.

“It’s just not plausible to be able to outlay that kind of money when wages, fabric sourcing and rent take up a majority of the budget … but I remain positive and believe that my loyal customers and my creative vision will see me at next year’s fashion festival ” Ms Hall says.