Indooroopilly cinemas in fight for customers 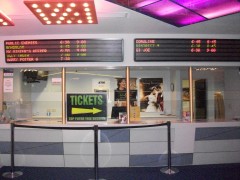 Out with the old and in with the new.

The rebranding from Greater Union to Event Cinemas has been described as an “entertainment revolution”, with the company boasting about bigger seats, seat service, state of the art screens and an overall better movie experience.

Manger of Eldorado Scott Eather says that while they have fewer facilities, customers prefer the cheaper prices.

“A lot of business that we’ve generated recently has come from customers complaining about ticket prices,” he said.

“Most believe that our service has a more personal touch than that of the larger cinemas – and being smaller, the general atmosphere is a lot more intimate and friendly.”

Event Cinemas manager Helen Kenna says that the increase in their prices comes as a result of the national price increase and that it hasn’t affected business.

” People seem to be responding well to the changes made and we’ve done our best to assist customers, such as offer a range of discounts,” she said.

Student Sean Tedi has attended both the Eldorado and Event Cinemas and says it’s a matter of personal preference.

“Some people prefer value for money and others want a quality experience when they go the movies, but I think at the moment people are more conscious of their spending habits,” he said.