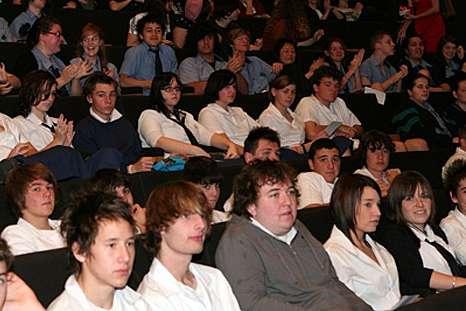 Over the past four years, Cinesparks has given more than 16,000 children and teenagers the opportunity to attend screenings so they get better access to quality cinemas.

Not only that, the young punters aged from five to 17, judge the films as well.

“The aim of Cinesparks has always been for young people to broaden their horizons and understanding of different cultures throughout the world,” he said.

“It’s a bit of an issue in relation to film … it is really important to taste different flavours from different cultures,” he said.

Cinesparks coordinator Sheree Kumar says their program is the only festival of its kind in the Southern Hemisphere.

“Interest grows each year; every year we have more and more schools and students trying to participate,” she said.

“Cinesparks is the only youth film festival of its kind in Australia.”

Youth-oriented film festivals like Cinesparks, which started in the river city in 2005, have already been popular throughout Europe and America.

“It draws inspiration from the Berlinale film festival and their Generation program as well as the New York International Film Festival,” she said.

“We are thrilled to see a really positive reaction to the program.”

This year, the films range from the whimsical animated Spanish flick Nocturna, which dealt with being afraid of the dark, to more sophisticated and controversial selections like The Girl, a Swedish coming-of-age drama.

Mr Weeks says that even though some of the flicks deal with difficult themes, the young audience has proved they are capable of handling them.

“We are extremely careful about programming to ensure films are appropriate, our young people are pretty sophisticated and they’re able to reflect upon some reasonably dark themes at times,” he said.

Jurors were selected from many schools across the city including Brisbane State High, Indooroopilly State High and the Aboriginal and Islander Independent Community School.

The students then posted their reviews on the Cinesparks website, giving honest accounts of the impact the films had on them.

“That’s kind of the point in a way; we can have different perspectives and discuss how these impact our lives in different ways.”