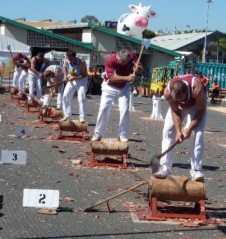 Woodchopping at the Brisbane Ekka sees competitors from the country spending a week in the ‘big smoke’, with city crowds watching and cheering on this most rural of sports.

The crowd in the stands is mixed. The Ekka’s traditional patrons – the gentlemen in tweed jackets and ties with RNA badges and their wives in long tweed skirts and sensible stockings – mingle with families from the city.  Even small groups of unaccompanied teenagers show an interest in a sport where the risk of serious injury is genuine.

Spectator Ray Lawrence, a Brisbane greenkeeper, was in the stands giving his young son his first taste of woodchopping.

“I come and watch it every year. You start to appreciate the finesse and technique of it.”

During the 12-inch log underhand chop semi-final, a competitor paused on his block and pulled up the toe of shoe to reveal it had been cut completely through.

He stepped off the block and stood leaning on his axe until the event was completed.

The spreading red stain on his white Dunlop Volley shoe belied his nonplussed look. Eventually he sat down and was attended to by six St John’s ambulance volunteers before being whisked away on a medi-cab.

Archie Beutel, an axeman from Crows Nest, says his fellow competitor would not have too bothered about the accident.

“He wouldn’t have even felt it mate, these axes are razor sharp,” Mr Beutel said.

“It got him right across the bottom of the foot but it was only a few millimetres deep.”

Mr Beutel competes in all the woodchopping the events at the Ekka: the underhand, the standing block, the tree climb and the crosscut saw.

“Blokes train all year for this – this is the big one,” he said.

“All the Royal shows are big. Sydney’s the biggest in Australia, the champion cutters from here all go down for that.”

Crowd numbers fluctuate as the day passes. Most spectators stay for one or two events then move on to the rest of the show.

Mr Beutel says the tree climb is the most popular event.

“These stands’ll be packed for that, for the crowd the tree is the biggest event,” he said.

Mr Lawrence says he was looking forward to the tree climb.

“The tree’s my favourite, we always come and watch that,” Mr Lawrence said.

‘Luck of the draw’

Mr Beutel nominated Rodney Dingle as the man to watch in the 12-inch standing block semi.

When Mr Dingle failed to complete his chop and stepped off the block, Mr Beutel said it was probably because of the log.

“There was a knot or some sort of hard bit in there – it wouldn’t cut clean so he walked away from it,” he said. “All the logs are cut from the same tree, numbered and then drawn out.

“The block you end up with is luck of the draw.”

Mrs Val Dingle, from Mt Perry in Central Queensland, is Rodney Dingle’s aunt. She was one of the many relatives who sat in the stands watching the men compete.

“My husband Arthur chops, all three of his brothers did and the boys do too,” she said.

“Arthur’s brother Don passed away this year. He was getting ready to chop, standing at his block at a show when he went.”

Arthur Dingle said his brother Don chopped at the Ekka for more than 50 years.

“Everyone knew him,” he said.

The handicap system of starting used in woodchopping allows choppers to compete late into life.

The younger competitors are interacting with and competing against men sometimes more than twice their age.

So do the Dingles enjoy their annual pilgrimage to stay in Brisbane for a week’s ‘chopping’?

“I’ll be pleased to get home again,” Mr Dingle said with a wink.