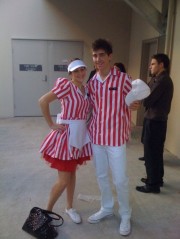 No candy canes were harmed in the making of these uniforms

Staff were informed that the take-over would include changes to the cinema complex, including a revamped movie store – soon to be ‘Scoop Alley’, but little could prepare them for this wardrobe malfunction.

Duty manager at the Chermside cinemas Mansoor Noor had spoken to fellow employees about the new dress code.

“While some staff were excited by the concept of the new uniform when put into context…inside Scoop Alley, however, the majority did not respond well to it,” he said.

While it may seem like a fun take on the movie experience, some staff simply cannot see the sweet side.

“Many staff have threatened to quit because they refuse to wear the new uniform due to their own opinions of the outfit and how they they might feel in public being seen in something that may be made fun of,” Mr Noor said.

“They feel their safety may be compromised, especially when taking public transport.”

Employee William James, 20, agreed catching a bus to or from work in the new uniform may attract unwanted attention.

“It would be embarrassing to get on a bus in that uniform…people might think I’m a paedophile!” he said.

“Plus, imagine working late night (Thursday’s) surrounded by all those teenagers… You’d feel like a walking joke.”

It may seem like an overreaction, but the staff at Event Cinemas Chermside have confronted senior management with their concerns.

Business manager at Chermside Gary Heidke has listened to his employees over the past weeks and agreed that the new-look uniform is just not practical.

“The management team have indeed taken on board some of the staff’s views and criticisms…and have now convinced head office to re-evaluate the new uniform to something that is more practical, appropriate and acceptable,” he said.