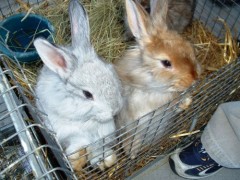 The owner of Eagle’s Nest Wildlife Sanctuary is petitioning the Government to legalise pet rabbits in Queensland, after being charged with possessing the domestic animal.

A lot of carnivorous birds in his sanctuary depend on the supply of rabbit meat.

“Ninety-two per cent of the raptor’s diet is wild rabbits,” says Mr Kunz.

In August 2008 the Department of Primary Industries raided his sanctuary, taking with them 97 rabbits, which were being breed for bird feed.

Mr Kunz has been trying to get a permit to keep rabbits for scientific purposes since 1992.

He says the government has commissioned taxpayer funded research which discovered, due to behavioural differences, domestic European rabbits will not breed with the wild population.

Meanwhile, CSIRO geneticist Dr Sandra Eady says: “CSIRO hasn’t done any work to see if domestic rabbits breed with wild rabbits, because it is illegal to do that throughout Australia.

Should pet rabbits be legalised in Queensland? Please leave your comment below.