Brisbane tunes in to digital radio

The sun hadn’t risen yet as Brisbane heralded a new era in broadcast media – digital radio.

“It’s the Expo of radio,” said Nova‘s hosts, before admitting they didn’t know what the fuss was all about.

Luckily a Roberts Radio stall was set up, with the coveted new digitals on display.

Brian James from Roberts Radio told me all about it:

The basic models come with a screen of scrolling text, which means you’ll never have an excuse to not know the name of that great song you just heard on the radio ever again. 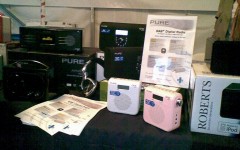 Digitals radios on display at the Roberts Radio stall.

Some of the radios have a built-in iPod dock.

The more expensive models have WiFi capabilities, which means you can connect to any radio station in the world. Imagine listening live to whatever they’re listening to in Russia. You can also tune into the many radio stations on the internet.

Mr James says listening to the radio has become interactive.

“You can program your own music,” he said.

“The functions are still experimental, but the core is developed.”

One such radio station, Radar, has been an internet-only station since November last year. Radar plays music by undiscovered bands. Now that digital radios can pick up internet stations, Radar can expose unknown artists to a wider audience.

“Digital radio is to radio as what colour was to television back in 1974,” said a very excited Spencer Howson from 612Brisbane, when he visited the Nova tent during their broadcast.

“I think people will shift back to listening to radio,” Mr James said.

But digital radios aren’t available to everyone yet. The cheapest digital radio is about $100, with the more advanced models – like the one that picks up internet stations – costing up to $1,000.

Potentially, you could pick up Reilly’s podcast shows on digital radio from the comfort of your own home. But Reilly doesn’t think moving to digital will necessarily move audiences.

“Radio audiences around the world have been in decline for several years as people buy themselves more and more iPods and iPhones,” he said. “That trend isn’t going to stop.”

Reilly points to a UK research paper which shows that the number of radio listeners is down from 90.5 per cent from 2003 to 89.5 per cent in 2008, even though digital radio has been in Britain for five years. 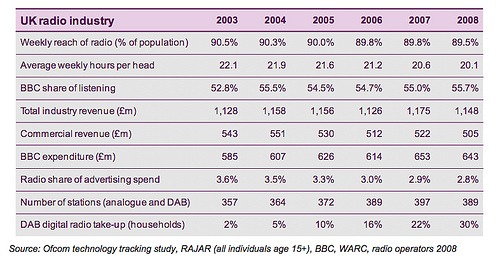 Research shows an increase in digital radio ownership, but a decrease in listeners overall

Despite more listeners buying digital radios – from 4 per cent in 2004 to 32 per cent in 2009, the number of actual people listening to the radio has declined.

Stephen Stockwell is part of the JACradio team – a dedicated group of UQ journalism and communication students who set up their own online radio station in May this year.

Stockwell tells me JACradio is almost an entirely student-run operation, using a studio and sophisticated computer software set up in the School of Journalism.

“We can say, ‘Allright computer, we’d like you to play a song from this list, then electro, then hip-hop, an ad, another ad, more songs…’”

It’s as easy as that.

But despite the fuss at Reddacliff Place, Stockwell says JACradio will stay online for the time being.

There are lot of advantages of online radio for a student-run station.

“For digital radio, you have to apply for licenses,” Stockwell said. “But for net radio stations, you don’t need anything. You don’t even need a microphone – all you need is a computer.”

Reilly became interested in podcasting also because of this accessibility.

“It was free and widely available,”he said. “The thing I like most about podcasting is that anyone can do it.

“You don’t have to be a mega-corporation to have a voice.”

For now, JACradio is going to explore the avenues of online broadcasting before jumping on the digital radio bandwagon.

The dogged start to switching to digital radio certainly hasn’t helped matters; Michael Lund reported in The Courier-Mail that digital radio at the ABC was delayed for the switch in May due to funding issues. The Australian launch is a few years behind other countries.

Reilly says new broadcast technology like podcasting is still in its early stages.

“I think podcasting has a while before it has a chance to go mainstream,” he said. “There are still too few “smart phones” in circulation, data plans are still too expensive and hard to figure out, and the technology to subscribe to a podcast is still too clunky for most people.

“If those problems are resolved, I think it has a chance of going mainstream by 2015.”

Internet radio, digital radio and podcasting – whichever comes out on top might end up leading a revolution in broadcasting.