Bent Books: the struggle for survival 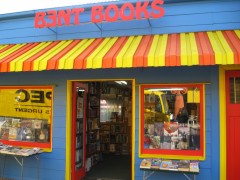 A vibrant shopfront: the product of realigned chakras.

Its facade is so striking that it has been featured in commercials, television shows and even an international architecture conference.

Bent Books in West End might be the most photogenic shop on Boundary Street, but second-hand bookstores in Brisbane have dwindled in recent years and Bent’s owner-manager Sean Mackinnon has found staying in business “extraordinarily hard”.

Mr Mackinnon, who has been in the book trade since he was in his 20s, said that in the last three or four years book sales have “dropped off significantly”.

“You have to sell a lot of $10 books to pay for expenses like utilities and wages, and to make money for yourself,” he said.

He said a lot of second-hand bookstores had shut down because of aging proprietors who tended to view book selling as a hobby rather than a business.

“I have a mortgage on my house against this place,” he said.

Mr Mackinnon said much of his shop’s success could be attributed to its reputation for diverse and high-quality stock, but its appearance has also been a key factor.

With its blue, yellow and orange colour scheme, Bent is flamboyant even by West End standards. And the shopfront’s colours have a quintessentially West End history.

When he took over Bent six years ago, Mr Mackinnon intended to have it painted federation colours like cream, green and maroon. He had chosen the colours and booked the painter when one of the locals walked in and made him an unusual proposition.

Out of money for the week, she offered to align his chakras in exchange for a book. Mr Mackinnon, in a moment of insouciance, agreed

The woman sat him down in the courtyard behind the shop and started moving her hands around him.

“I had no idea what she was doing, but suddenly those colours just popped into my head,” Mr Mackinnon said.

“It was just freaky – and I’m not a spiritual person at all.”

When the shop was due for repainting two years ago, Mr Mackinnon briefly considered giving it a makeover, but decided to stick with what he knew.

“The colours have been so successful – the shop’s popped up in commercials, it’s been on The Gruen Transfer and people are constantly asking to photograph it.”

Mr Mackinnon said that while people like the idea of niche stores being around, they are not always prepared to “open their wallets” to support them.

“A lot of local people say they’re so glad Bent is here and we love it and all that, but they never spend a dollar in my shop,” he said.

“I want it to continue – not just because they’ll take away my house if I can’t make the mortgage payments, but also because Bent Books deserves to be there and West End deserves to have Bent Books.”