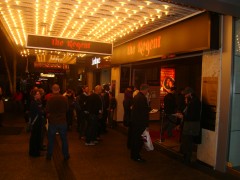 Crowds flock to the screening of Balibo at BIFF.

Starring Anthony LaPaglia, the film tells the story of five journalists who were killed during the invasion of East Timor by Indonesian forces in 1975.

The film was meant to be screened in one cinema, however  BIFF chose to open a second cinema due to popular demand.

Balibo won two jury awards at the festival, including the best film for the Asia-Pacific region.

Director Robert Connolly said the film’s release was timely, with the 10-year anniversary of East Timor’s independence being celebrated at the end of this month.

“On August 30, East Timor celebrates 10 years of independence and whilst there’s much that is sad about what happened to East Timor, there is  a great optimistic story that we celebrate through this film,” Connolly said.

The film is based on the book Shooting Balibo, which was written by journalist Tony Maniaty – a reporter for the ABC in East Timor just weeks before the Indonesian invasion.

Mr Maniaty said if it had not been for the hard work of Connolly, the cast and the crew, the film would not have been a success.

“There were so many obstacles in the way and I think it’s an amazing tribute to these guys that they have persisted for so long to get this film up,” Mr Maniaty said.

Actor LaPaglia said he felt a responsibility to the people of East Timor to tell the full story of the Indonesian invasion, rather than concentrating on the murders of the Balibo Five.

“As we got into the film more, it became a much bigger story,” LaPaglia said.

“About a third of the Timorese population was wiped out and once we started getting into the film we realised we had a much larger obligation than we had originally anticipated,” he said.

Emerging Australian actor Damon Gameau said there was no way he would pass up an opportunity to work on such an important homegrown film.

“This was a job that doesn’t come along very often,” Gameau said.

“I was profoundly affected by the county and by the people during the filming process.”

LaPaglia also said he was also emotionally moved whilst in East Timor and commended Connolly and the young actors for their performances.

“The work of the five young actors is immaculate,” LaPaglia said.

“The work of the director, equally immaculate.”

He said that it was refreshing to work with young actors that came in “all guns blazing”, giving “1000 per cent.”

“I think Damon and Gyton [Grantley] are going to go a long way,” he said.

“They’re as good as anybody overseas at the moment.”

LaPaglia said that events such as BIFF were “essential” in promoting the Australian film industry.

“There is no reason for the Australian film industry to be in this position right now; all the talent is here,” he said.

“We’ve just got to find a way to put it all together.”

One guest at the screening said the film was “exceptional” whilst another said it was “the best Australian film in years.”