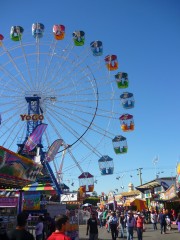 In the same year the first telephone call was made, the Ekka was born.

The Intercolonial Exhibition was held for the first time in 1876 and would eventually evolve into the Brisbane Royal Show.

It is now known as the Ekka – short for ‘exhibition’ – and has come a long way since giving out free sample bags of coal and charging only half a dollar for entry in its infant year.

As the rides grind to a halt and vendors pack up their stalls in this its 132nd year, the show will never be the same again – adding more stories to its rich and colourful history.

In 2010, the iconic chairlift will cease to exist and the Industrial Pavilion, home to the Ekka showbags, will be demolished.

Residential developments will for the first time allow 10,000 people to live on site and Main Parade will become a street of retail outlets.

Also on the construction agenda is the addition of a produce market, as well as walking and bike paths allowing for easier access from the city.

The cost of all these developments is $3 billion and will alter the the face of the Royal National Agricultural and Industrial Association’s (RNA) Showgrounds dramatically – and forever.

The RNA Showgrounds is steeped with interesting history and has been home to memorable events other than the Ekka for many generations.

It was a day of firsts in 1928 when Sir Donald Bradman debuted on the main oval for the first Australia vs England International Cricket Test Match played in Queensland.  In uncharacteristic form he scored 18 runs and was dropped for the second test.

In 1971 the Springbok’s played at the ground during their international tour. A two-metre wire fence had to be erected to separate the specators from players.  Queensland’s premier at the time, Sir Joh Bjelke-Peterson, bussed more than 450 country policeman to the showgrounds to control the unruly crowds.  Anti-apartheid protests had begun nationally since the Springbok’s arrival in Australia and because of this the Premier had declared Queensland in a state of emergency.

The living monster that is the Ekka has only ceased to inhabit the ground twice since its inception – and only in the face of major world crises.

The showgrounds were turned into a temporary hospital in 1919 for victims of the Spanish influenza epidemic , which eventually killed 12,000 people in a nation of 5 million.

During WWII, troops used the grounds for training and accommodation but vacated every August especially for the show.  Only in 1942 was the show cancelled to allow the army to use the area as a staging depot for troops moving north.

Life on the road

The RNA Showgrounds also becomes the home of carnival ride operators while the Ekka is in town.

Many of the classic rides and familiar Ekka day foods are transported around Australia by showmen and women before reaching Brisbane.

Although an annual trip down memory lane for most people, the Ekka is but one of over 300 carnivals showmen attend across the nation throughout the year.  Showmen’s Guild of Australasia members travel to many cities between Perth, Hobart, Cairns, Darwin and Brisbane with their families, uprooting their lives and moving each week to bring us monstrous machines, good food and family fun.

While the RNA Showgrounds will lose a couple of great icons and have its infrastructure significantly changed, it is evident only few adversities can stop the great tradition of the Brisbane Ekka.

It has been woven into Queensland’s history and is now a classic icon.

Not even the deadly swine flu and global financial crisis of 2009 could kill it.