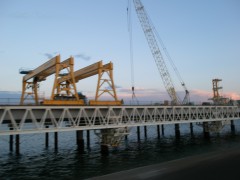 The construction of the Hornibrook Bridge (Houghton Highway)

Australia’s engineering numbers are lagging behind most other developed countries, with a shortage of over 20,000 engineers.

Dr Dawes says a great deal of the engineering deficiency is spread across Queensland.

“If engineering numbers don’t increase, it will threaten the development of industries,” he said.

Queensland hosted an engineering week at the start of this month to highlight the roles and achievements of engineers. It included showcases, tours, talks, and open days running from August 3 to 9.

“My opinion is that it isn’t promoted as well as Science Week,” Dr Dawes said.

He says few people are able to identify the roles of an engineer.

He also says the industry has failed to flaunt its diversity and like the whole of Australia, Queensland universities are experiencing a slump in graduating engineers.

“It provides cost effective solutions to everyday problems and through technology, makes the world a better place to live.”

QUT lecturer for Mathematics and Education, Professor Lyn English, says the biggest problem is the average person has limited knowledge of the fields inside engineering.

A team of Queensland researchers, including Dr Dawes and Professor English, have launched a three-year project funded by the Australian Research Council (ARC).

The Dean of Middle School Academics, Malcolm Carter, is already testing out the project at Grace Lutheran College in Rothwell, north of Brisbane.

Mr Carter teaches a Year 7 science class at the school, which he says allows him to observe the project first hand.

“Young people need to be challenged in school, but they also need stimulating and enjoyable activities that link clearly with the real world,” he said.

Engineering is not and probably never will be a subject at most schools, but Mr Carter says he has been linking it with science and maths.

“At the moment, it’s too early to tell whether the project is working, but the students at Grace have been interested and that’s a good start,” he said.

Main Roads Queensland (MRQ) has also jumped on board the school engineering project.

Paul Connors, from MRQs education branch, says the growing shortage of engineers will continue to affect the transport infrastructure industry.

“We simply don’t have enough people graduating from engineering degrees to meet the industry demand,” he said.

MRQ and Grace Lutheran College have organised for students to study the Hornibrook Bridge on site with its engineers.

“For the students who are pretty good academically, engineering needs to become more attractive.”

For Griffith University student, Adam Coombes, the industry could not be more appealing.

He is studying civil engineering, focusing on coastal regions.

“The people who are into this degree are usually the ones who walk around barefooted on the weekends,” Mr Coombes said.

“There’s a lot of water and waves involved, therefore a lot of maths, but it’s designing things like pipes and break walls, as well as measuring tides, which we did through the university up in the Torres Strait.”

Mr Coombes is a mature-aged student and says he gave up a lot to go to university.

“I hadn’t been to school in 10 years and I had to relearn everything from scratch, like algebra and trigonometry, in my first semester but I did it and I’m doing really well now,” he said.

His fellow classmate, Emma Jones, has one year left of her civil engineering degree.

“My strengths are in engineering,” she said.

“Maths, science, designing, and project management – it doesn’t matter whether you’re a male or female, it depends on your strengths and weaknesses.”

Ms Jones says there are about 10 girls out of 130 students studying engineering in her year.

“But there are so many opportunities for engineers that are coming up and there’s a big demand for us,” she said.

“It’s going to be a well paid industry.”

Year 12 students are reaching the final months of school and are in the process of deciding their future.

Ms Jones’ advice is to explore what the engineering industry has to offer.

“Talk to students, talk to as many people in the industry and make the decision from there,” she said.

“Engineering offers a diverse range of career paths, so, if you like the idea of it, why not give it a go?”