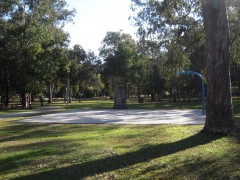 Indooroopilly residents are concerned there is no lighting at Robertson Park.

Residents want safety reassurance at a park on Brisbane’s westside and are demanding the city’s council comply with guidelines set by the Queensland police.

Robertson Park, on the corner of Francis Terrace and Lambert Road in Indooroopilly, has sparked community discussion over the park’s lack of lighting.

Indooroopilly resident and mother of three, Mrs Barbara Peck, says the park is used by hundreds of people a day because of the exercise stations, basketball court and cycling track that have recently been installed.

“So many people, especially children, use the park facilities but it’s just not safe to use during late afternoons,” she said.

“We just want to prevent anything bad from happening, so that in six months time there won’t be any incident to report.”

The guidelines suggest for a safe public setting, there should be enough lighting for regular and easy surveillance.

However, the Brisbane City Council is not required to follow the CPTED guidelines.

Councillor for Walter Taylor Ward, Jane Prentice, says the complaints are only about the extended hours of usage of the park, and not to do with fears of safety.

“We are not aware of any safety issues involving the park, or of any major concerns within the community – it is a very safe neighbourhood,” she said.

But Cr Prentice does agree while the Brisbane City Council has been very active in maintaining public areas, there is always more to be done.

“There’s always room for improvement but we know parks are very important to the community and we’re doing the best we can,” she said.

“If there are safety issues at local parks, the Lord Mayor should be addressing them as a matter of urgency,” she said.

“Cr Newman needs to make sure our parks are safe for people who use them.”