Just two weeks after the Gold Coast Titans beat the Brisbane Broncos in the NRL, another Gold Coast team has upset its bigger brother up north. 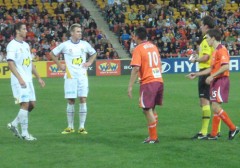 Roar and United players in dispute over a referee’s call : Tom H. Monsen

Goals from Shane Smeltz, Jason Culina and Robson made sure that the local crowd of nearly 20,000 went home disappointed.

Roar was the dominant side for the majority of the game, but they failed to convert their chances into goals. It wasn’t until the 90th minute when substitute Michael Zullo was put down in the box and a penalty was awarded that Roar managed to put the ball behind United’s goalkeeper Scott Higgins.

United on the other hand made the most of their chances, converting three out of four into goals.

Newly returned Socceroo Jason Culina was the dominant force on United’s midfield scoring a goal on debut for his new club.

Culina was also one out of 10 players that were booked in a match that wasn’t particularly ugly.

The first interstate soccer derby in the Queensland won’t go down in the history books as a mind-bending experience, but for the soccer fans on the Gold Coast is was a night to remember.

The next interstate derby is scheduled for this Saturday when Gold Coast United hosts the other newcomer in the A-League – the North Queensland Fury at Skilled Park.

The game statistics can be found here.