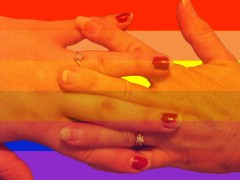 Natalie Thompson is getting married. She is standing in Queens Park, Brisbane, surrounded by her friends and family. The only problem is Natalie is marrying her long-term girlfriend Samantha, who is also a bride. This wedding ceremony is fake and not legally recognised in Australia.

Apart from the fact the ceremony is illegal, the day is perfect. Both brides are dressed in traditional white; there is even a wedding cake.

“Sam and I are in love. We know this isn’t a real wedding, but it’s the closest we’re going to get to married unless the Government decides to change their mind on same-sex marriage laws,” Ms Thompson says.

Same-sex marriage in Australia has been a hot issue lately in both the gay and straight community.

Equal Love Queensland spokesperson Jessica Payne is certain that eventually the Government will have to change their position on same-sex marriage.

Ms Thompson and her new “bride” believe the issue is one of basic human rights.

“These ceremonies are being held not only to allow couples something they deserve, but to highlight this issue to the Government and create an atmosphere of pressure,” says Ms Thompson.

“There’s immense pressure from both within the Labor Party and from the community for them to lift this ban and give same-sex couples equal rights,” she says.

The women admit they are fighting an uphill battle.

Although Galaxy polls show a majority of Australians support same-sex marriage, Prime Minister Kevin Rudd has stated multiple times he believes marriage is only between men and women and has no plans to change marriage laws.

Ms Thompson admits it feels a bit hollow getting married in a fake ceremony.

“It’s a shame really that we are forced to do gimmicks like this to get attention. But we are in love, why shouldn’t we be allowed to get married like everyone else?”

Same-sex marriage does have the support of the Greens.

The act is currently the subject of a Senate inquiry.

“The Greens’ Marriage Equality Amendment Bill stands as a piece of legislation that is ready to bring Australia into step with other forward-thinking nations,” says Senator Hanson-Young on the Greens’ website.

Although their marriage is fake, Ms Thompson looks forward to going home with her new “bride” and hopes the laws will change soon.

“Society is moving forward, not backwards. Sooner or later the Government will have to listen to us. Until then Sam and I will just have to be pretend married. But I’m happy with that for now.”