Gold Coast United tamed Brisbane Roar 3-1 in a hard fought season opener at Suncorp Stadium, in front of a crowd of almost 20,000. 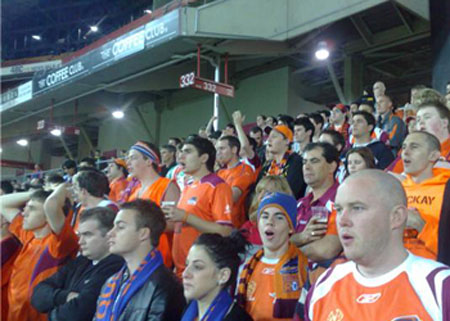 Big money signings  Shane Smeltz and Jason Culina both scored goals either side of halftime, with Brazilian Robson scoring a brilliant third to seal a victory for the Coast.

Brisbane Roar dominated the game in both halves, but it was three flashes of brilliance from the Gold Coast that separated the two teams.

In the 17th minute Aussie international Joel Porter crossed from the left for New Zealander Smeltz to stab home a historic first A-League goal for the Gold Coast.

Smeltz made a good run down the left, before flicking the ball to the lurking Porter, who cut the ball back for Culina to calmly score.

The home team briefly got back into the match when Michael Zullo earned a penalty for Brisbane, converted by Van Dyk in the 90th minute.

A frantic final five minues saw Brisbane throw everything at the Gold Coast defence, before Robson stole the show, running from near the halfway line to score a goal that Pele would be proud of.

Gold Coast coach Miron Bleiberg was a humble winner and had sympathy for the man who took his job, Roar coach Frank Farina.

“I looked at Frank’s eyes and told him, ‘Look I’ll tell you something… you played better’,”  Bleiberg said at a post match press conference.

Farina admitted that Gold Coast had the “bragging rights”, but he dismissed owner Clive Palmer’s claim that his side would go undefeated this season.

“Never.  I’ll bear my backside on Pitt Street if that happens,” Farina said.

Gold Coast captain Jason Culina was happy to be back in the Aussie spotlight, with his team winning the first Queensland derby in over 20 years.

“These are the games you want to be playing in.  All the hype, the excitement that this game brought, was fantastic.  If we could play games like this every week it would be great,” Culina said.