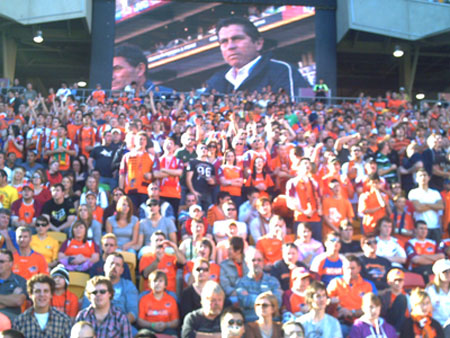 The A-League season sparks to life tonight for Brisbane Roar and Gold Coast United, in what is expected to be a thrilling local derby at Suncorp Stadium.

Brisbane Roar are keen to show they can get further this year after bowing out 1-0 in last year’s semi-final to Adelaide United.

Gold Coast United are one of two new editions to the A-League and millionaire backed Clive Palmer has high hopes for the team, claiming they will win the league undefeated this season.

The Roar’s form, meanwhile, has been patchy, losing 3-0 to Glasgow Celtic a fortnight ago.

Brisbane Roar coach Frank Farina is eager for tonight’s match to get underway.

“It’s the local derby.  I think it’s important. It’s great that we’ve finally got one and it’s most probably the only real derby in the A-League,” Farina said at a pre-match press conference.

“Finally the season is here … A big crowd is expected for what should be a fascinating season opener.”

Roar captain Craig Moore is excited about playing in the derby.

“It’s a game we are really looking forward to, a great way to start the season and hopefully it will be a good game,” Moore said.

“I think that it is important that in front of what we believe will be a big crowd the teams put on a good performance to ensure that the future of the derbies will be that more exciting as well.”

Kick-off is at 7:30pm at Suncorp Stadium.