Sub-tropic begins its life with a visit to the neighbours … 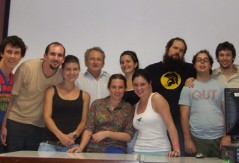 The magazine Sub-tropic is a product made by Journalism students at the Queensland University of Technology, in Brisbane, Australia; and its area of interest takes in the sub-tropical zone of South-east Queensland and the NSW Northern Rivers.

However to start the publication, a reporting group of nine from QUT have moved out of zone to test their skills with some international reporting, and this week’s edition is a special feature –  from the neighbouring country of Papua New Guinea.

The reporting team based themselves at the Divine Word University at Madang on the country’s Northern coast.

They completed a two weeks’ assignment, with also a stop-over for briefings at Port Moresby, the national capital.

What has come out of this foray into reporting away from home base, where the jobs are different in every way – new kinds of events, new leading identities, different cultures, very different ways of doing things?

Reports in this edition include:

Hardships and successes of a regional hospital in a developing country; the war on malaria, and on HIV-AIDS (a major campaign backed by Australia); observations on the State of Origin Rugby League (PNG being the only country where Rugby League is the national sport); profiles of people of Papua New Guinea; some news about news media; game fishing; and two large development schemes – in mining and fisheries—generating trouble now in local communities.