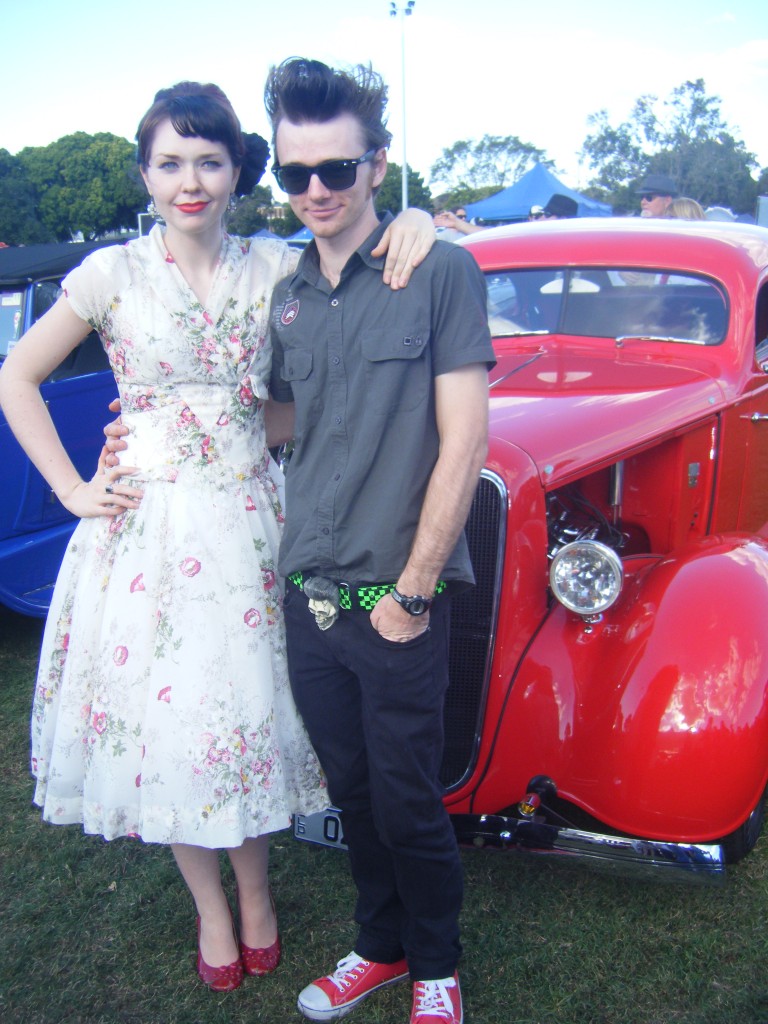 Thousands of revellers from around Australia and internationally cruised to the 10th Greazefest Kustom Kulture Festival in West End last weekend.

Organisers say it is the largest celebration of vintage cars and fashion, rockabilly music, lowbrow art, and tattooing in the Southern Hemisphere.

The four-day event sold out its late night performances on Friday and Saturday nights.

The celebrations culminated in the all-ages hot rod show on Sunday, where vintage and customised car lovers young and old could get a taste of yesteryear.

The festival included some of the premier rockabilly acts in the world, Marti Brom – based in the US, Australia’s The Satellites, and Johnny Law and The Pistol Packin’ Daddies.

Other attractions included the vintage markets – racks full of retro-inspired and period pieces picked apart by fashionistas, rockabilly CDs and records, to the downright odd.

Old-fashioned hair lacquer was available for that slick, Grease lightnin’ look, pinstripers were set up to detail vehicles, and festival-goers could get inked inside an authentic pink and white 1959 caravan, at Mimsy’s Trailer Trash Tattoo. The van, which is based in Archerfield on Brisbane’s southside, headed to Greazefest for the second year in a row, bringing with it a collection of vintage pin-up and sailor tattoo designs for visitors to survey.

Greazefest is proof that, more than half a century later, the music, style and flavour of the 1950s is clearly still alive, and not just for those who lived through it.

Children under the age of 10 danced to youth psychobilly group, Checkered Fist, whose members are aged between 12 and 16, and surveyed the classic Cadillac’s and custom vehicles with as much awe as their parents.

Full vintage regalia was worn by mostly a 20- to 30-year-old demographic – all far too young to have experience the 1950s firsthand.

Festival director Lori Lee Cash calls herself a ‘kustom kulture’, which means she follows the trend of customising everything, from cars, to your own body, to give a sense of individuality.  She is an 1950s expert and says while a revival in interest in the decade began in the 1980s, the movement has grown significantly since then and the Greazefest event with it.

“A lot of people look back on the 1950s because it was a time of great celebration after the war, and people were spending money on cars and style, and so there was a boom in innovation,” she said.

“It was a decade of excess, but not greed like the 1980s – it was design excess, fashion, cars and home design became extreme.

“We’re not cashing in on a fad – we stay true to the roots of the culture and it’s just about immersing yourself in it.”

She says the festival is very popular with younger crowds.

“The people in their 40s who love this culture, they’ve mostly outgrown getting dressed up but still love the music,” she said.

“Those in their 20s haven’t done it yet – it’s exciting and it gives them an identity.”

First-time Greazefest-goer Stephen Smith says he was ‘blown away’ by the dedication of some of the visitors, who were completely immersed in the look of the culture, which began with the vehicles of the 1950s.

“It was crazy to see all those cars in such immaculate condition and all the customised detailing,” he said.

“The music, and the fashion – the art and it all, kind of just seemed to revolve around the cars, first and foremost.”

Ms Cash says you do not have to be a bona fide rockabilly or hot rod fan to swing by.

“Just come in and enjoy the culture – I want to keep things open and let it carve its own path,” she said.

The festival will be held for July 30 to August 1 next year.

Click here to view a gallery of images from Greazefest 2009.