Janet Rowaro, 25, recently returned to Bougainville in Papua New Guinea (PNG), after war tore her family apart when she was a child, forcing her to grow up without her mother.

Her story began as a normal infancy on the island of Bougainville but after the separation of her parents, she went to live with close family.

However, in the fighting of that time between the PNG Defence Force and rebel groups such as the Bougainville Revolutionary Army (BRA), Ms Rowaro and her family were suddenly caught up in the civil war.

The BRA was dominant among groups wanting independence at least special autonomy for Bougainville Island or affiliation with Solomon Islands.

At age 11, Ms Rowaro was evacuated to safety, but not able to live with her mother again or return to Bougainville, except for just one day. 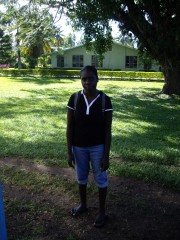 The conflict started in 1988, when an Australian company, Bougainville Copper Limited (BCL) owned by Rio Tinto, started operating a copper mine on the island.

They demanded profits being created by the mine were not equally shared between the local workers and the company.

Miner Francis Ona initiated the Bougainville uprising after asking for compensation for damage caused to the environment by mining wastes.

Cultural and ethnical differences between workers from Bougainville and the mainland of PNG also contributed to the conflict.

‘Afraid of both sides’

Ms Rowaro was just young child during the conflict and says her parents did not want to take part in the war.

“We were afraid of both sides,” she says.

When the war started on Bougainville she says her parents were told by the BRA they would destroy the village if they tried to flee the island.

“My guardian parents made an arrangement for us to flee the conflict,” she says.

In 1995, she fled her homeland with her guardian’s family, which included her aunt, uncle and their children, settling on the main island of PNG.

Ms Rowaro says she remembers the morning she had to flee from her district of Siwai in the southern part of Bougainville. 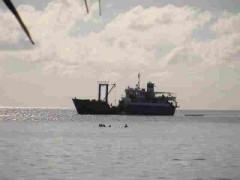 The boat that took Ms Rowaro away from her mother.

She remembers she was taken off the beach to board a naval vessel, then transferred to the PNG Government ship MV Sankamap.

Ms Rowaro later regained contacted with her father but her mother stayed in Bougainville with her new husband.

Over several years Ms Rowaro moved  from one place to another within PNG and began studies three-and-a-half-years ago at Divine Word University (DWU) in Madang.

In 2007, Ms Rowaro was sent by her then-employer, Wonetok radio station, to Bougainville for the launch of a new radio service,

Ms Rowaro hoped for the chance she might be reunited with her mother, but had to return after one day.

She says for family reasons and practical reasons like the cost of travel to Bougainville, Ms Rowaro doubts she will see her mother any time soon.

She says she does not have any resentment towards her mother and father over the rupture in their lives and their long separations.

Ms Rowaro says she she understands the forced separation she suffered was all due to the war, not the actions or wishes of anybody in her family.

She says transport to Bougainville remains unaffordable for her.

“For me to go it’s expensive,” she says.

“It’s just the same amount if from Port Moresby to Brisbane.’’

Ms Rowaro is now waiting to complete her course at the end of this year so she can start working towards her goal of saving enough to visit Bougainville and see her mother.

“I plan to see her when I have a steady job, when I can afford to go there and meet her,” she says.

She says she hopes to do the trip this year or “maybe next year.’’

Despite the ravages of war to her family, Ms Rowaro has been able to go to school and continue with a tertiary education in journalism.

She also worked one year for Christian Radio Station, based in Mount Hagen.

Ms Rowaro says her advice to people with one parent at home is never give up in life.

“You have to believe in what you believe in and I should say that education is the sweet revenge for everything,” she says.

“If you get an education, it’s like an all-new perspective in life.

“You can do whatever you can if you have education.

“Don’t let circumstances or your emotional feelings let you down.’’