The art of the buai

Betelnut is a passion of Papua New Guinean people.

The telltale crimson stained teeth separate the man and woman in the street from those with pretensions to Europeanisation.

Experimenting, I trusted in the idea that for a white man to chew the buai, as it’s called in Tok Pisin, (pronounced “BOO-eye”) , is to break down a cultural barrier and be seen as showing respect for the New Guinean way.

Firstly the betelnut itself, a generally moist, under-ripe kernel found inside a palm nut. Think of a coconut about the size of a ping pong ball with a half-dried lychee inside. You rip it open with your teeth and prise out the buai.

Once you’ve chewed that up into paste it’s time for a bite of mustard stick (dacca) – a 10-cm long section of a fresh and crisp vine, a little like apple without the sweetness.

Then you dip your dacca in lime (kambang) made from crushed up coral.

Go easy on the lime; remember this is the stuff people use to mark out running tracks and destroy dead bodies they don’t want recognised; too much of it does the lining of your mouth no favours.

A few bites of limed up mustard and your saliva is turning bright red from the chemical reaction.

The physical and mental sensation grows slowly, even imperceptibly.

Your first awareness of it may be that you are sweating profusely, even for hot and humid PNG.

The “stone” itself, and describing it as such exaggerates the potency, is a mild feeling of comfort and contentment.

The more you chew and the less you spit, the stronger the sensation; at most it’s a numbing pleasantness, but generally it resembles the contentment of finishing your first beer after work on a Friday.

“Buai is a good social lubricant,” my mate Chris says. He has the ground-in stains on his teeth of the seasoned buai chewer.

Theo is also rarely without a chew.

“Some nights we sit up all night in our dorms chewing and talking,” he says. “Can end up talking all night because of the buai.”

The relationship between buai and conversation is strong, as are the class and racial implications of it as an activity.

Chris speaks highly of the Spaniard working at his university who chews incessantly and smokes local tobacco.

Being seen with the telltale red lips and teeth draws surprised comment and happy giggles from many locals: “YOU chew buai?”

Others take you aside and praise you with evangelical zeal for understanding the importance of chewing buai every day.

Spitting out the remnants of a chew before entering the university staff dining room for lunch attracts looks part scornful and part offended; there is clearly a remnant colour barrier that a white man chewing buai has crossed. “Going native?”

The economics of the buai have implications throughout PNG.

For villagers in the lowlands, growing it creates cash flow in a mainly subsistence economy.

The palm is notoriously difficult to cultivate and will only fruit in certain areas.

It doesn’t grow at all in the highlands, where the love of the nut is strong.

Highlanders travel down to market towns to get their buai, creating a nexus for commerce but also for the spread of HIV/AIDS from the lowlands to the highlands.

Buying large bags of buai and then selling the nuts individually at roadside stalls drives the cash economies of the urban settlements.

In Madang the individual nuts retail for between 10 and 30 toea (5-15c Australian) depending on size, colour and age  — the older the nut, the drier the buai and the stronger the chew.

Depending on the area, buai sales can be lucrative.

Stalls I visited in Madang turn over hundreds of kina a day.

Iin Port Moresby a well-placed stall, having paid off the right people, can gross thousands daily; the prices are higher there, starting at 30 toea a chew, but the buai is very strong.

There in “POM” buai sellers tend to be fringe dwellers, often driven away by the zealous security guards employed by the CBD’s resident corporations.

The stalls are more likely to be rolled out blankets on the footpath, but the generosity and friendliness of the buai sellers remains a constant.

Buying in bulk (spending maybe 2 kina) means receiving free gifts of dacca and small nuts from the sellers – the smiling ladies cackling through crimson teeth always worried about the condition of my kambang pot — storage holder.

For them chewing all day endows a permanent state of contentment and amusement.

The red saliva is what makes buai an anti-social activity.

Areas where in Australia you’d still find a pile of cigarette butts are more likely to be a puddle of menacing red spit in PNG.

Best to get your hepatitis shots organised. 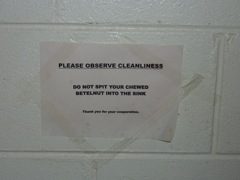