In Madang, Papua New Guinea at origin time there is only one topic that carries any weight in conversation.

Telephone calls finish with a “happy origin day” salutation and every available garment of a colour approaching maroon or blue is deployed.

The heavy cloth jerseys, beanies and scarfs are dutifully worn despite temperatures above 30 and humidity that builds to a crushing crescendo around an hour before kick off.

The public mini buses have flags hanging from their aerials indicating which team the driver supports.

Supermarket promotions offer blues or Maroons merchandise to the lucky winner and electrical goods ads promise origin on a bigger or better screen if you come into the store and buy today.

The heckling of the white fella with a maroons jersey started on the walk to the venue for the night — “Hey! Go the blues!” from passing cars and trucks.

The security guard in the supermarket continued the sledging: “Go dem blues – we gonna win tonight!” he said, tugging at his blue work shirt.

The process of picking a team to support can be as simple as the colour of the uniform you have to wear to work or, more commonly, which jersey was given to you as a kid.

Pre-game charge up in the long-grass

Origin 2 – 2009: The walk up the road in search of a few takeaway beers to prepare with, was significantly hairier – out the back gate of our university compound into a muddy alleyway with anonymous cries of approval or derision issuing forth from the darkness.

A family man running down the street carrying a TV paused to discuss the maroons’ prospects while his teenage kids demanded he get moving now lest they miss the kick off.

At the bottle shop the mesh screen remained firmly shut while the mob with the face tattoos and teeth stained red with betelnut, mostly broke, leered through, hoping for the most unlikely miracle of free booze from a cornershop proprietor.

Twenty-five kina (A$12.50) got the peephole in the security bars opened and a six-pack delivered.

A way through the mob of vaguely threatening and entirely hard looking well-wishers was negotiated with a lot of hard hand shaking and threats delivered to New South Wales and its supporters, before our beers were knocked off and it was time to trek up to the viewing room.

The streets were completely empty with half an hour until game time; the windows glowed with neon; cackles and cheers drifted out into the night. 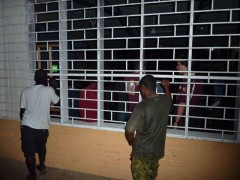 Take any view you can get!

Arriving only just before kick off meant a back row view in a hall packed with two or three hundred punters all trying to get a decent view of a standard lounge room TV, no huge plasmas or projector screens here.

There was no clear demarcation of supporters in the hall; big hits and flashy stepping were the currency of everyone in this crowd.

Willie Tonga folding The Wolfman in half got them roaring and when Greg Inglis crossed for the first try there was a noise to near lift the roof off.

After Israel Folau crossed for Queensland’s second try the crowd was firmly in the maroons corner and those wearing blues jerseys were looking sheepish, until Jarryd Hayne sparked the comeback with big steps off both feet and sheer pace.

Big plays converted the crowd quickly and when the game’s momentum shifted to the blues, the crowd shifted with it!

Everyone in PNG supports a team in origin but backing of a team for your lifetime is often not the way of things here.

Some back the team that picks their favourite players; Willie Tonga had drawn in a fair entourage for Queensland in Origin Two.

Queensland teams generally have more indigenous players, which appeals to a lot of New Guinean fans.

Inglis was a firm favourite but Pacific Islanders Petero Civioniceva and Folau received big cheers with every touch.

That Hayne’s silky and spectacular plays won him the crowd’s respect and cost the maroons a few supporters illustrated that the real passion New Guineans have for origin is that it is the pinnacle of the game that they love.

Rugby League is the passion, Origin night is simply a vehicle to express it – that and the love of a good fight.

Loving a blue, if not THE blues…

When Luke O’Donnell started a bit of push and shove with a group of maroons the expectation in the room rose.

When Justin Poore and Michael Crocker actually started throwing and landing punches it got more of a reaction than any of the tries. While the refs consulted touch judges to work out who was to blame, eager, grinning footy fans re-enacted the blue with each other.

When the telecast played the fight back in slow motion each punch was greeted with a joyous roar of cheers and hands raised in celebration.

Trent Barrett’s high shot that KO’ed crowd favourite Inglis didn’t raise anywhere near the ferocious uproar that was no doubt shaking the pubs and lounge rooms of Queensland.

Shots legal and illegal are to be worn without complaint; payback should be administered in the next defensive set.

The knife’s edge last 20 minutes kept the crowd quiet until Cameron Smith cleaned up from a bomb and sealed the game for Queensland.

When the video referee revealed the green try sign the crowd leapt up in celebration — and everyone was a diehard maroons supporter!

The sight of disconsolate Barrett near weeping on the field drew jeers and scorn ….for a man who delivered a cheap shot to knock a champion out of the contest, (and STILL couldn’t win the game); or just for a bloke who dared to cry in public. 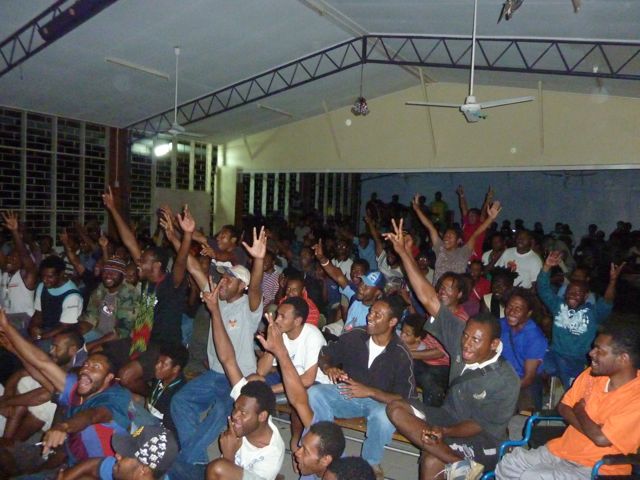 The green light is given: Maroons win!