There’s one thing you notice when you first arrive in Madang, PNG (apart from a free-for-all luggage collection bay at the airport) is the lack of Western tourists. One is met with curious inspection by the locals, as well as smiling children who seem to come out of hiding when new visitors come to their town. You can’t help feel like this place is all too familiar and yet so different in so many ways. PNG really is on the road less traveled, and Madang is the gateway to a vast wilderness. 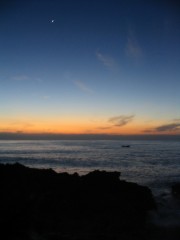 Madang is located on the north coast of PNG, and lies along the Astrolabe Bay of the Bismarck Sea. It is a communication point for offshore islands such as New Britain. It has a major port which handles exports such as copra, coffee, cocoa and coconuts. Local industries depend very much on the abundance of marine life that exists in nearby bays, tuna processing being one of those. Other industries include timber milling and the manufacture of black twist tobacco, which the locals smoke. Its landscape is stunning; it boasts a beautiful harbour surrounded by mountains and tropical vegetation.

In recent times, Madang has become better known for its adventure style tourism, with many activities including, diving, fishing, surfing, trekking and canoeing available to those interested. But you would still be hard pressed to find a tourist in these parts; mass tourism hasn’t exactly taken off in Madang. There is the odd resort that offers all the comforts of the Western world, but I would say you come here to escape luxury, to mix it with the locals and have a crack at the local semi-narcotic indulgence: beetle nut (if that’s what you’re into). According to Executive Director of the Madang Provincial Culture and Tourism Office, Erigerie Singin, Madang’s appeal is far-reaching. However the place has become more interested in promoting cultural tourism; which would mean taking people outside the town centre. “We would like to show people our rural areas and for them to experience the heart of our nature and our culture, and see for themselves how welcoming the villagers are to outsiders,” she said. 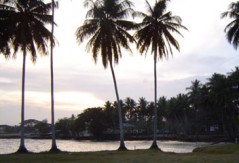 Here, the industry is still in its infancy and inevitably appeals to those seeking the unfamiliar as well as untouched. In Madang, there is something alluring about the tropics; a place that hasn’t been dollarised into submission, where time slows and sitting by the waters edge sipping sweet coconut juice and watching the sun sink into the distant mountains is one slice of the PNG paradise. This is no doubt a lifestyle one could get used to. A place where things are cheap and a stroll down to the markets is as far as you’ll need to walk to find fresh food and an active informal economy. Maybe you would like to take a boat ride across the bay to one of the scattered islands nearby; to witness some of the subsistence-based village life that tends to go on here. Whatever you plan to do when you get here, you can be sure to find the right time and place for your needs as a traveler.

As for me, I got to know the place as best I could for the eight days I was there, observing the daily hum of a foreign land. And foreign it was. Similarities to the place I’d just come from were still visible: Australia, which left its colonial footprint after leaving in the 1970’s with PNG gaining independence. However the people highlighted the differences in culture for me. They were hospitable and welcoming and the scaremongering that I had come to know back in Australia, where friends, colleagues and government websites had warned me of the ‘dangers’ of going to PNG, seemed unfounded. 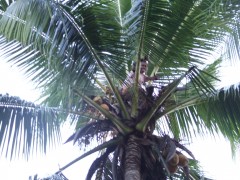 In one display of amicability, a boy offered to retrieve some coconuts for my colleagues and I while we were walking along the waters edge of Astrolabe Bay. He proceeded to climb one of the tall coconut trees nearby, pull a few coconuts off the tree then throw them down to the ground. He then climbed down and picked the coconuts up, handing them to us. We were shocked when all we got was a smile and no hand outstretched for money. Something that had astounded us was a perfectly normal transaction for the boy too eager to show off his climbing skills and too happy to give us a coconut each.

People in Madang seemed eager to please. They seemed proud of their homeland and very happy to share it with us. I was truly blown away by how genuine the locals were, not just in being friendly but also doing their best to understand me when I was asking for directions. In one particular comical incident, I played the naïve tourist, completely unawares of the advice I’d been given of how to conduct myself in situations involving valuable items. I had to get out of the car to ask for directions to a nearby place by the name of Jais Arben. In my focus to find out the necessary information of where to go, I paid no attention to the wallet in my left hand which I was waving around quite freely, without thinking about present company  — a gathering crowd — and how attractive that wallet may have looked to everybody. I later learnt while I was conversing with these particular locals that according to my colleagues waiting in a nearby car, it looked as if I was conducting a mesmerized audience, a little transfixed by the shiny, expensive looking object in my left hand.

The point here is that it seems they are as curious about you as you are about them. They are helpful, friendly and more than happy to get to know you and help you on your journey. It seemed to me that this was the road less traveled and locals haven’t quite worked out how to rip off Westerners yet. Maybe it is more about wanting to project a decent image to outsiders. It is important to note also that Madang is probably one of the safer places in PNG, with places like Mt Hagen and Port Moresby being some of the trouble areas. So tourist slip-ups won’t necessarily be punished in Madang like they would elsewhere, though I do feel lucky in the sense that I had a fairly forgiving crowd that day on the way to Jais Arben. 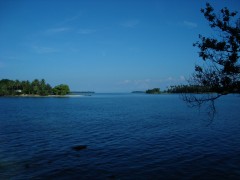 Jais Arben was probably the perfect finish to an interesting week in Madang. Located barely 30 minutes drive outside of the township, Jais Arben is located on a headland surrounded by islands and villages. It boasts a good quality resort that is both affordable and comfortable. Here I found PNG-style relaxation with all the comforts of home. A bar by the swimming pool, restaurant overlooking the water, not to mention the luxurious beds we got to sleep on (compared to the ones we just came from, at a hostel in Madang) in our modest cabins located on the waters edge. There is nothing like a cabin next to the sea, with the soft sound of waves falling, and with the wind whistling a faint tune straight from the vast ocean just outside your windows. Again this was a place where the local welcome that we’d had all week, had carried over to this established tourist site. I’m not even referring to the hotel staff who are paid to be nice to you (although one cant help think that they would be nice to you regardless of whether you paid them), I’m talking about the villagers located across the water on a nearby island as well as those who came to greet us from other surrounding villages.

One morning I decided to go snorkeling. So close to the resort, I felt comforted by how luxurious this place was, and I relaxed into the rhythm of the water as I gazed upon the magnificent coral gardens below me. My colleagues, who were nearby, mentioned the idea of swimming to an island about 200 metres away. Coming out of my wonder world of the tropical fish and their colourful homes, I agreed to this and we started swimming. I was at first disappointed that a certain amount of exertion was required to propel myself towards a goal. I could have quite happily taken all day to float there. But we eventually put our feet down on soft sand. We sat for a bit, and took in the tropical paradise we were in; the white sand, the blue water, the palm trees and engulfing humidity all contributing to the encompassing sensory experience we had that day.

Out of this I was again amazed at the welcoming locals. Some villagers paddled past us in a canoe inviting us to go fishing with them. My colleagues declined but I said I would come and watch. I swam around, transfixed more by the colours of the coral than the nets they were casting to try and catch their prey. Eventually, they finished and invited me to sit with them on the beach to smoke some tobacco and chew beetle nut. I declined on this, but still managed to have a chat with them all. What I noticed here on this island was what I had been noticing all week; the human value amongst people is universal despite the exposure to tourism. Here I was, near a resort with mostly Westerners, and only a short paddle to a traditional lifestyle of local Papua New Guineans very interested in who I was and where I had come from. Here by the beach, we would learn something of each other, at the most basic level of human interaction. Despite language barriers, we conversed. The humanity of the situation shone through, and sitting here in a tropical paradise surrounded by the most genuine people I had met in a while, I felt lucky.

In a nutshell: Madang, PNG

Don’t be put off by the overload in warnings (heed them but don’t let them cloud your judgement), this place is magical and worth going to, to make some good self-discoveries. Travel warnings, cannibals, raskols, developing paradise. PNG is all of this and more therein lies its charm.