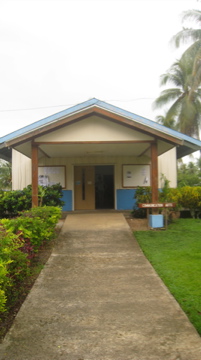 Students and staff in Communication Arts at Divine Word University (DWU) in Madang have put out a special edition of their magazine to raise awareness of anxiety and depression and encourage sufferers to seek counselling.

Bonnie Aboloa, a graduate  student and Media Officer for the student magazine has been studying mental health with two other students, and working with patients at the Modilon Hospital Psychiatric Clinic in Madang.

She says students are among those suffering from mental health problems and  there is very little awareness among them about issues like the psychological effects of trauma and mental illness.

Promotions, like the special magazine edition, set out to inform them of the symptoms of anxiety and depression and encourage them to seek help.

“In the past couple of weeks training has been going on for trauma counselling by expatriate specialists. They are working with social workers to train them to specialise in counselling victims of trauma which is very necessary for students and the community in Madang”  says Bonnie Aboloa.

“Most people recognise they have lost interest in life and activities but do not realise that losing interest for an extended period of time may require counselling and support.”

She says many people are also not aware of the consequences of drug and alcohol abuse as the symptoms of mental illness experienced by victims place great strain on families and the community.

“Families experience shame and embarrassment from the family member suffering from mental illness and sometimes lock them away to keep them off the street.

“Most Papua New Guinean people relate the symptoms to sorcery and claim that the person has been put under a curse by an enemy.

“This is why many do not get referred to the local hospital or receive treatment,” she says.

The students on the mental health project believe programs involving counselling and care need greater funding and as much education, and volume of awareness campaigns, as the heavily-supported effort against HIV-AIDS.

“Although thousands of people die from AIDS per year in Papua New Guinea mental illness and drug and alcohol abuse affect the country greatly, yet they are low priority for government and private funding”, Bonnie  Aboloa told Subtropic.