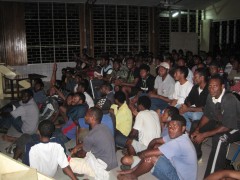 Origin night – game two. Gathered around the TV, the crowd is rowdy. Excited cheers fill the room as a Blues player goes down to a great Maroons tackle. With the scores still level at zero, every pass is watched with feverish anticipation…who will score first?

Five minutes in and Maroons’ star Israel Folau makes a break. A roar erupts from the crowd as they urge him forward. A minute later, a quick pass to Greg Inglis and the first points are on the board. The noise can be heard streets away.

You could be mistaken for thinking you were standing in the middle of any Queensland pub on Origin night.

But here, thousands of kilometres away in Madang’s Divine Word University, PNG, Origin fever has hit them hard.

It was the most talked about topic around the campus in the lead-up, as the students debated the chances of a Blues comeback and the possibility of a new Origin record.

State of Origin in Papua New Guinea is a big event; there have been claims of people betting their cars – and even children – on the outcome of the game.

But for this mostly-student crowd, it was all about the excitement of the game.

Minority group: one of the few Blues supporters.

The crowd was clearly behind the Maroons, but the few Blues supporters remained optimistic at half time despite an early onslaught from the all-star Queensland side … and to tell the truth, now and then, the Blues picked up some extra supporters when they were doing well.

“We will come back,” one eager student declared, “we almost did it last time.”

They enjoyed the  on-field scuffles nearly as much as the tries, with the slow motion replays earning appreciative cheers with every punch thrown.

At the end of the day the Maroons emerged victorious, with that one last video referee decision ensuring a historic win for the Queenslanders.

The satisfied crowd slowly dispersed with loyal shouts of “Queenslander!” to be heard throughout the night while the Blues supporters slunk away to lick their wounds and begin mourning their loss.