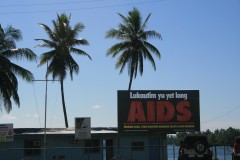 A prevention campaign billboard in Madang, where a high percentage of the population is illiterate.

At the moment that Joe’s life should have expired, it began. Barely alive he was found beaten and bruised, floating off the coast of Krangket Island like drift wood rolling with the waves. Joe’s story is not unique, especially as members of  his family had put him there.   It is not uncommon for communities to ostracise the HIV positive, but it is what Joe did next that makes him exceptional and made the possibility of “living HIV positive” in Papua New Guinea, seem like life after death.

Despite the Australian government pledging $100 million to the cause in 2007 the virus has continued to spread rapidly. Currently 64,000 Papua New Guineans have tested positive to the virus.

Yet AusAID Australia believes this number will balloon to 500,000 by 2025, infecting more than 5% of the country.

While there are attempts to educate the population, most people are illiterate or inaccessible in the highlands regions, and AIDS continues to spread along trade routes, passed on in promiscuous heterosexual encounters, slowly seeping into remote communities.

Joe Egu, who campaigns as an AIDS activist in Madang, points out that government campaigns are not being heard in the highlands, where the majority of the population live.

People with the virus unknowingly spread the disease to their family and friends; then the children die, and that is when the community reacts.

His two year-old child, who had AIDS from birth, slowly withered away from pneumonia. His wife, who had never taken a HIV test, returned to her village and in grief told her family that Joe was the reason that their child was dead. An enraged mob of male family members traveled to where Joe lay weak and alone in his run-down hut, suffering from the same infection that had taken his child. They dragged him by his feet out of his house, down to a cliff. There they ripped branches from trees and picked rocks from the ground and beat him in front of his other children. He recalls they  huddled together, watching and crying as Joe, inches from death, bleeding and battered was thrown from the rocks into the salty water below.

By chance, Joe was plucked from the water and tenderly nursed back to life by members of the Catholic Church.  Over the next few months as he gained strength, he began to know he did not want others to be cast out by their families for contracting a virus that is misunderstood , but condemned by the community.

“When I came out of my death bed and into life, I knew that I had to do something” said Joe Egu.

These days Joe looks healthy. Strong and muscular, he bounds across rocks and stretches a strong hand out to steady people as they step off the boat on to Krangket Island, where he almost died. He almost skips as he shows me around his island paradise, waving to the local children who greet him. But when we reach the cliff his smile disappears.

He still refuses to dwell on the past and today lobbies development aid organisations and the Papua New Guinea government with a controversial idea: Joe Enu believes the  government needs to stop spending monetary aid on prevention campaigns and instead use the funds to care for those who already have the disease.

“Millions and millions of dollars have been spent on prevention campaigns and the virus is still spreading. I tell them that resources need to be spent on people that determine the viral flow. I strongly believe that it is the positive people that live with virus, they alone have the ultimate power, whether to prevent, to stop or to spread.”

This contentious theory has not fallen on deaf ears,  as more and more aid groups join the cause of emphasising care for  those who have already contracted the virus.   Similar programs have been implemented in Cambodia and some African countries and in many there are reports of a decline in infection rates.

American Ambassador to PNG, Leslie Rowe, met Joe Egu in 2005 and boosted support for this strategy by meeting positive sufferers and pledging US aid toward more program sites, to treat the HIV positive within their own communities.

Today, Mr Egu has become the project manager for People Living With Higher Aims (PLWHA), which has five sites in the Madang province, mainly supported by US aid.

He  smiles as he tells of these villages, where HIV positive people live and interact with the community, while receiving care.

A grin of hope slides across his face as he energetically talks about stigma toward AIDS declining:

“The media portrays a negative image of HIV and Aids into the hearts and minds of people so if you have contracted the virus automatically you are out. But if people come out in the public and say I have access to services, I can move on in life, then we can change and we can get rid of this virus.”