Papua New Guinea flinched at the word “cannibalism”, reviving old terrors, in June, when authorities revealed they had found the dismembered remains of an infant abducted on the country’s north coast.

The area, near the town of Bogia, is the centre of conflicts between local communities and thousands of people resettled from a nearby volcanic island.

Four men have been arrested under suspicion of murdering a three-year-old girl, amid suggestions of a link with sorcery.

The child had been living in the Asuramba Care Centre in Madang, but travelled up the coast to attend a church meeting with her younger sister and her mother.

Five men started chasing the group and although the mother escaped with the baby in her arms, the three year-old fell behind and was captured by the men who fled the scene with her.

Police say what happened next may well have been linked with a so-called “cult house” and bizarre practices to do with sorcery.

In an official follow-up, on Monday 29.6.09 there was a gathering of senior police, members of local councils, some academics and other community leaders, in the provincial capital Madang, for a round-table discussion on problems with witchcraft.

Doctor Anastasia Sai, (pictured),  a university anthopologist  told the gathering suspicion of sorcery, fuelled by rumours, can be a divisive strategy to secure influence for sorcerers, feared for having supernatural powers. 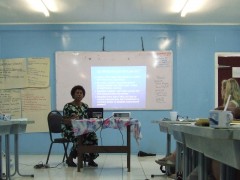 Speakers commented that deterioration of government services had led many people back to “old ways” that included putting their faith in witchcraft.

Madang’s Acting Prosecutor, Michael Ruari, said sorcery remained a dominant belief in Papua New Guinea, which could be used to explain everyday misfortune, such as road accidents, and such claims can lead to retribution.

Another aspect to the consternation over the child’s death is that it forms part of a campaign of intimidation against her people, the Manam Islanders, who moved to the mainland more than five years ago.

The Local Government President of the Bogia area, Lawrence Konaka, is from the same island group, and he told Sub-tropic in an interview (23.6.09) “my people believe she has been eaten’’.

The Manam islanders were helped by the PNG government in a general exodus from their home, not far north of Borgia, after a series of volcanic eruptions on the island caused vast destruction.

The government re-settled them under a special law, (Manam Resettlement Authority Act 2006), and allocated places to live in five plantation areas.

They were not accepted by the people of the area as they came from a different ethnic background, and as they stayed on and their population increased to more than 10,000, things got worse.

They began “borrowing” or squatting on other land, better for cultivating gardens, to the anger of the resident communities — who started talking about “invaders”.

Violence between the two groups has become recurrent with deaths on both sides.

Four people were killed earlier this year, and later another man was killed, not long before the murder of the small girl.

“My people, they die every day’’, Lawrence Konaka says.

According to Mr Konaka, serious conflicts started after the government stopped providing special aid to the settlers, causing them to search for a new livelihood.

“We are living on a state plantation … This is not our problem, this is the government’s problem’’, he says.

A place originally used for the initiation of men in Borgia, later known as a “cult house”, is widely believed to have been put into continuous use for sorcery.

Four men stand accused of infanaticide deny committing murder, and are understood to be claiming that the little girl died of shock during her abduction.

A fifth man is still wanted for questioning.

A skull and a jawbone were found as well as the clothes of the young girl but there have been no other traces.

A personal footnote to the tragedy of the Manam Island disaster, and its aftermath, is provided by one of its young victims, who spoke with Anna Chisholm, for Subtropic.

Cecilia Kimagl is a first year journalism student at Madang who witnessed the conflict in the region before the abduction of the little girl.

She said members of the Manam community of settlers suspected the abductors had eaten the body of the child in order to gain strength against their enemies, leaving the remains to threaten and shock the settler community.

Cecilia Kimagl travelled to Kolong in the area for a university community outreach program, and there she experienced the hostility of landowners toward the migrants from Manam.

The main water supply for that community was destroyed by landowners, the settlers claiming their well was somehow poisoned making the drinking water unsafe.

Landowner groups declared rthey were “on strike” as all the land they needed had been taken up by newcomers.

She said chaos and violence was badly affecting the wellbeing of  young people especially.