A different religion on a Sunday

Sydney based teams in Australia’s National Rugby League often complain about the heat they encounter when playing night games in Townsville in winter because temperatures reach the mid 20s.
In Madang,  Papua New Guinea games run all day Sunday and the midwinter temperatures consistently hit the 30s.

The crushing humidity means the lightest shirt is soaked through with sweat in minutes.

A one kina entry fee (around 50 cents Australian) gets you five or six games of Rugby League – “The Greatest Game of All” as the half painted mural on the clubhouse wall declares.

The plank bleachers have corrugated iron roofing that shelters the punters from the sun and provides something to whack when celebrating a try or big play. 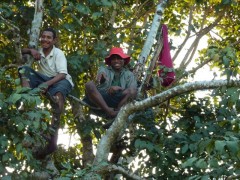 Best view in the house

The first of three A grade games starts at 2pm with Madang North Raiders taking on Brothers. Every Christian denomination you can think of is doing business for souls, minds and bodies in New Guinea but has a religion ever achieved ubiquity like the Catholics with Brothers footy clubs?
The hot, wet climate ensures a soft ground and grass that grows in front of your eyes. When the ball is kicked into the in-goal it disappears in long grass – the dead ball line seems to operate on an honour system. 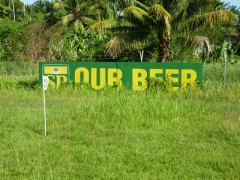 The game is refereed on the basis of achieving continuity of play.

The play-the-balls are slow but penalties for interference are rare.

If defenders are going to be able to retreat the 10 metres in this heat they need a slow ruck to give them time.

Felix, Chris, Theo’ and I are leaning back in the stand surrounded by a crowd chewing and spitting betelnut or smoking locally grown and the deathly strong “spear” tobacco rolled in newspaper.
Felix plays hooker for Divine Word University, premiers in the Madang competition for the past six years. All three of the fellas are students there.

“There is a lack of good coaches here; at our club the senior players coach the side and younger ones learn from them,” he says.

As the game goes on the quality of play improves – a hallmark of undercoached teams.

Players go on with tackles after the ball has been offloaded or the whistle has been blown.

Getting dumped hard like this would near guarantee a blowup and punches being thrown in Rugby League in Australia but these blokes love tackling and being tackled.

When headclashes and splits happen the wounded get a sip of warm water from a coke bottle and a seat on the ground in the sun while a washed out bandage is unwrapped from a Kilometrico biro and applied to the wound.

The jerseys are the old style heavy cotton – they end up soaked after a couple of minutes play in these conditions.

At halftime the coaches deliver textbook Rugby League sprays about completing sets, muscling up in defence, turning up ready to play and, of course, giving 110%. 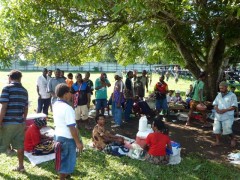 Out the back at the “snack bar” there’s a different selection from that available at Lang Park.

Betelnut and spear are the big selling items.

The crowd gather to talk footy while chewing intently and pause occasionally to let loose a stream of crimson betelnut spit.

The teams for the next games are warming up behind the bleachers, Newtown Panthers look focussed on their drills, while on the other side of the paddock the Bangui Royals team are taking a more relaxed approach.

A big crew of supporters and well wishers are observing the warm up around cars blaring pop hits. 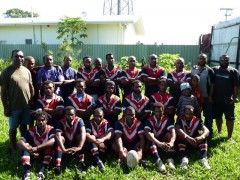 The Royals are a police team, although not all players are members of the Royal PNG Constabulary.

In Madang you can’t buy takeaway grog between Thursday night and Monday morning.

The only place you can get a beer for a park drink at the footy on a Sunday afternoon is to ask a copper.

The forthcoming warm South Pacific Lager is a good start although a lack of willingness to rip the cap off with my teeth undermines my credibility somewhat.

It is a beautiful discordance to be drinking warm beer and talking Rrugby League with a man missing half his right ear as George Michael’s ‘Somebody to Love’ blares out of a souped up car stereo.
When the siren goes and Brothers have won 22-20, the Panthers and Royals make their entrances to a cacophony of hands and feet banging on corrugated iron. 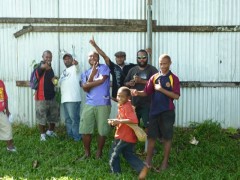 The opening exchanges are enlivened by the referee summoning a touch judge for a serious dressing down for an unknown misdemeanour; the crowd howl with pleasure as the touchy goes from dismissive to defiant then is broken to contrition and dismissed back to the flank to sin no more.

The Panthers debut a big Tongan prop in number 14.

He dwarfs every other player on the ground and the crowd demand he take the ball up, calling “14-ah!”

The big fella isn’t too eager to stand in the middle of the ruck but when he eventually gets the ball he bowls over halves, centres and wingers in a 50 metre run.

That he vanishes back to the fringes straight afterwards shows how intimidated he is.

Being a fit, strong 110kg Tongan rugby player is one thing; having to be tackled by nuggetty New Guinean league forwards is another.

As the game goes on the sun moves further behind the bleachers and the patch of grass designated as the bench becomes shadier.

The bench men take their jerseys off to cool down and rub them on their heads to remove sweat; no ice bags here.

It’s 16-16 with seconds remaining and a Panthers winger dives over in the far corner; the crowd erupts; players leap into each other’s arms and the Royals slump to the ground.

The referee blows his whistle – game over, tied match.

When the bulk of the Panthers realise what’s happened they join the mob surrounding the ref, who remains in complete control as he dismisses their concerns with the cool superiority of a public servant.

He jogs off with his touchies as the Royals wander toward their bench looking spent.

We’ll hear more about this; although the LBC Warriors and Tarangau Eagles are already on the field and they’re the biggest, fittest looking teams of the day. 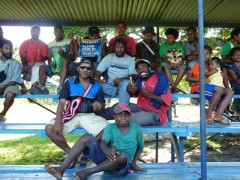 They wait, we wait, the ref waits.

A stream of red saliva shoots past my foot.

Providing touch judges is the responsibility of the teams who played in the previous game and the Panthers are still pissed off.

They won’t provide anyone and the Royals aren’t going to do so if the Panthers don’t.

We wait – the Panthers make threats.

Eventually a couple of fellas in sweaty referee shirts run on to sardonic cheering.

One looks a great deal like a bloke who has been sitting in front of me chewing betelnut all afternoon. 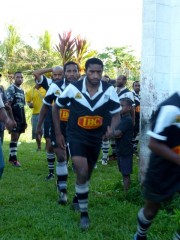 The Warriors enter the fray

This is clearly the main game; the hits are huge and the ball is moving through multiple sets of hands.

The crowd is rejoicing in the physicality of it.

“There might be a fight in this game,” Chris says.

On the field or in the crowd?

If that’s on then I need to be sitting in the sections where the crowd is loudest, to find out what’s going on; I might go for a walk.

Chris is inclined to be understated.

“They have been here for a long time, they get bored, they get pissed and by this time they might take things personally.”

The crowd speaks frankly to the referee about their differing interpretations of an event on the field; they are emphatic on this point.

He comes over and blows his whistle to signal time off then holds up both hands, and either does a music-less rendition of the chicken dance or demonstrates two mouths talking, talking.

He puts a finger to his lips, cocks an eyebrow and nods knowingly.

The crowd are suitably impressed and quieten down as he starts the game again.

The gap in conversation presents an opportunity for the president of the Madang Rugby Football League to make an impromptu speech.

He has clearly not passed the day unrefreshed; the coppers, or somebody, have kept him in stubbies of SP lager. 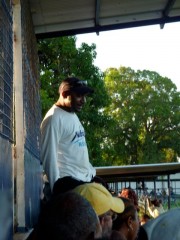 He sways at the top of the stand and announces in a halting fashion that next year Madang will host a provincial championship game, although it hasn’t been finalised; and it might not happen; but it should; we did it; well done and remember; we want this; so, behave yourselves.

The polite but sniggering cheer he receives satisfies him and he lurches back into the officials’ box to irritate the timekeeper some more.

On the field the ball handling swings between sublime and ridiculous.

Holding the thing in one hand out in front of your body creates some dazzling play, but more often it means dropped ball on the first tackle.

Headhighs are penalised consistently but the legal shots would rock any Queensland Cup team.

The popularity of dreadlocks amongst the players exaggerates the contact as bodies collide.

It’s a quarter to six and we’re running out of light fast, as this close to the equator the sun drops like a stone at the end of the day.

The ball handling gets worse and the hits get bigger.

The president stumbles out for a reprise of his keynote address, but shrinks back in the face of the thinning crowd’s irritated scorn. 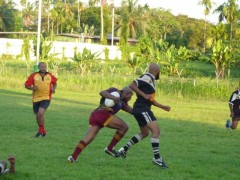 My companions reckon it’s time to go; the Uni dining room stops serving dinner at seven; just chew up a new betelnut for the walk.