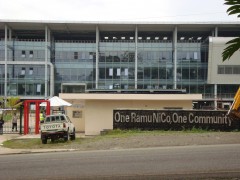 The Ramu Nickel Mine, located in the Madang Province on the north coast of PNG, is one such project that has drawn fierce debate between the locals and government for this very issue. It was first commissioned twelve years ago, and continues to attracted considerable attention…

The Chinese-owned mine has been dogged by a series of problems since construction started two and a half years ago. There have been deepening concerns over the environmental impact of the mining, as well as the impact to the local fishing industry in nearby bays. Concerns have been voiced over the current construction of a 135 kilometre pipeline to transport slurry from the mine site to a Discharge Facility at Basamuck Bay, where hot tailings will be disposed of 150 metres below the water’s surface into Astrolabe Bay.

A Catholic priest by the name of Phil Smith, who lives by the seafront of Basamuck Bay, said he is disturbed by what might happen to such a pristine marine environment. He said there had been next to no community consultation over the project, and locals had been left in the dark as to the cost to the marine environment. “Nobody knows what’s going to happen when that sludge goes into the bay,” he said. Mr Smith described the “washing machine” effect with the tides that would inevitably move the sludge around; as oppose to settling on the ocean floor, which is what Ramu Nickel has proposed would happen.

According to the Madang provincial government, an environmental study was done in 1999 to assess the feasibility of dropping an estimated 5 million tones of hot tailings into the sea per year. The conclusion was that it was a responsible practice as the runoff would sink to the bottom and settle on the ocean floor. Father Smith said the Evangelical Church commissioned the Australia-based Mineral Policy Institute (MPI) to conduct their own study in late 2000, and found it was unlikely the waste would stay put on the ocean floor.

“The Lutheran church was the first organised group to get on to it and they brought environmentalists up, and their conclusion was that the mining company hadn’t done a proper impact study on what was going to happen when that sludge goes into the bay,” he said.

The Mining site is set to offer nickel for the next 40 years, to be used for stainless steel production in China. Madang President of the chamber of commerce, Stotick Kamya said the mine was the first of its kind in PNG, and is an exciting venture set to bring major benefits to the local economy. However, as it stands, mining jobs have been assigned to Chinese workers, with around 3000 currently at the different Ramu nickel sites; but Mr Kamya said jobs would eventually be offered to locals.

“We [PNG nationals] still lack expertise in terms of human resource, but I believe gradually the key positions for the project now being held by the Chinese will be localised to the nationals,” he said.

He said the government is also focused on making sure Ramu Nickel follows its environmental responsibilities and conduct set out by the government. “The Ramu Nickel should come up with the best practice whether their production is on sea or land and it terms of waste disposal,” he said.

Environmental concerns have also extended to the issue of the 135km pipeline occupying land owned by the local people. The Chinese company had originally constructed the pipeline without compensating landowners; only until after it had been built had locals been given royalties. Mr Kamya said the government is now ensuring that local owners are properly compensated for occupation of their land.

“Land ownership is a delicate issue and you cannot push a project until the people have been well and truly compensated,” he said.

A Madang journalist and academic, Kevin Pamba, said the controversy over this project has been ongoing. Many people are skeptical due to social and environmental impacts of mines in the past in PNG, such as the OK Tedi Mine and the Bougainville copper mine; decommissioned in 1989.

“These mines and resource extracting projects have been allowed to carry on in this country for over forty years.

“When you look at the benefit to the people of this country and what they have gained as a nation, people have been given somewhat of a raw deal,” he said.

Tension in the community is set to continue while they work through the hard process of deciding on compensation and settling concerns over the environment.  In one instance tension had reached boiling point, with four workers killed through a dispute between Chinese and PNG workers at the Ramu Nickel refinery in late May. The Ramu Nickel Mine project does seem to be going ahead despite differences, and is set to be in operation by 2010.