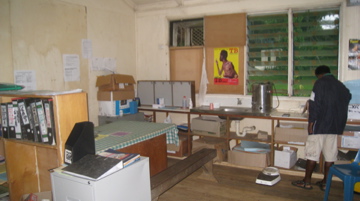 In a country plagued by the deadly lung disease, TB, many people are refusing treatment for reasons linked to superstitious beliefs; and while services are limited anyway for cost reasons, some progress is being made.

Bokung Wenani, a Provincial health official began a new program at the Madang hospital specialising in treatment of TB in January this year.

Tuberculosis is highly infectious and is causing great problems, spreading rapidly in Papua New Guinea, prompting a government drive to provide services free, (in a system where small fees are usually charged).

“I believe no one should be charged for treatment because of the serious nature of the disease, it is highly contagious and can affect anyone – children, adults and adolescence.

“We detect TB in around 70% of those patients who are tested for the infection,” Mr Wenani says.

A problem atthe General Hospital is confirming whether TB patients are fully cured after their two month course of medication, as many patients will not give consent to a second test and often they have not taken the complete course of antibiotics.

If the full course of medication is not taken the virus is spread further throughout communities, and this can occur especially between patients and social workers or carers who contract the disease and pass it on to more patients.

“We are unsure of our success rate from treatment as the program has only been running since January. In the past it was between 50-60%; it is now predicted to reach up to 90%. For total success we need the patient to convert after two months from positive to negative. This means re-testing the patient and their consent is needed. Often, they do not return to be re-tested,” says Mr Wenani.

“If those people who come into contact with the initial infection have other diseases such as HIV/AIDS or pneumonia they can contract full blown TB very easily.”

More could be achieved with expanded facilities, like microbiology laboratories, especially to deal with complex viruses like HIV.

“More people can be treated at earlier stages of the infection if we get these resources,” he says.

“We need to have a fully functional laboratory, good supply of drugs and people trained to diagnose and treat patients…. encouraging patients to receive follow up treatments.”

Stuart Pau is the Clincial Health Extension Officer in Madang and believes that more people can be successfully treated for TB if more carers and hospital staff are trained to educate communities.

He says that symptoms of TB are often believed to be related to sorcery.

“We come from a strong cultural background and certain communities have strong beliefs about sorcery…. We have lots of people from rural areas with no basic knowledge about TB and how it is contracted.

“We have patients with all the symptoms of TB yet they say they are victims of sorcery and refuse treatment; this is why people must be educated.”

Training involves professionals from the Department of Health coming to educate nurses and carers to speak to communities and to assess, evaluate and monitor the infection to stop it spreading.

It all takes  funding and resources  for research and training; and also better coordination  among different branches of the health service.

“If we have proper research facilities we would have a clear picture on where the treatment is going wrong.

“At the moment about four to six percent of people coming to the hospital for treatment die, this figure should be about two percent.”

A five year project based on Madang, to provide treatment and training through to 2012, is being backed by national and international agencies:  World Vision, Hope World Wide, JTA International and City Pharmacy.