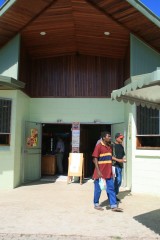 The opening of the Diwai Mart, at the Divine Word University in Madang, marks the availability of food to the community but also puts a brand-new laptop into the hands of 2500 students.

The Supermarket-laptop scheme was conceived by the student-body over a year ago, in order to minimise paper use in the university.

The students want to protect Papua New Guinea’s rainforests, which have one of the largest deforestation rates in the world, similar to that of the Amazon.

The students decided using laptops would allow the university to reduce paper waste and protect the centuries old jungles that many students originally grew up in.

All profits made from the corner store-style supermarket during 2009, will be put towards purchasing ACER laptops for the entire student body.

Student President Robroy Chicki, 24, expects the Supermarket to provide funds for up to 1000 laptops by the end of this year.

In support of the students’ project the University has promised to subsidise the purchase of the remainder of the laptops, to hasten the introduction of the “paperless policy”.

Mr Chicki oversaw the project, which included building the supermarket from scratch.

“Papua New Guinea is not a rich country. This supermarket is for the students, after we have all the laptops, future profits will be put towards supporting students on debating and sporting trips,” said Mr Chicki.

The supermarket facilities include; a bakery, an ice cream parlour, a hair salon and two atm’s.

Many residents surrounding the university also use the facility.

The next project the student committee is taking on is building themselves a headquarters on campus, which is expected to be completed for Cultural Day celebrations in August.